One assembly staffer also tests positive, all employees to be tested

• Employees at the assembly say they have been kept in the dark. They said mass testing had been halted because it was costly 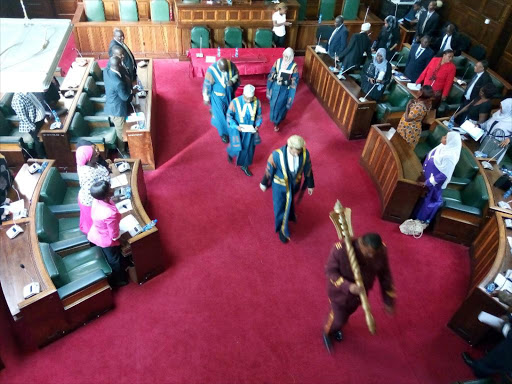 A two-week recess for Mombasa MCAs has been extended by 14 days after seven ward representatives tested positive for Covid-19.

The Mombasa County Assembly has also been shut after a worker contracted the virus.

MCAs were expected to resume sittings on Monday.

Deputy speaker Fadhili Makarani earlier said three MCAs had tested positive and that the 14-day recess could be extended for another three weeks.

“We have three MCAs and a few staff who tested positive and that is why we decided to extend the recess because the whole place needs to be fumigated. People have been given two weeks to go for self-isolation,” Makarani said.

However, Speaker Kharub Khatri later confirmed seven MCAs and one assembly staffer had contracted the virus.

Employees at the assembly say they have been kept in the dark. They said mass testing had been halted because it was costly.

But Makarani said there were staffers who were still at work because they all needed to be tested.

“I am not in denial that our people are at risk but we need to test them and if the situation gets worse, we will close the assembly," Makarani said.

He said the Covid-19 contagion comes with stigma and that they did not want to raise alarm because the cases were still few and manageable.

The official said the county assembly leadership will take necessary steps to ensure everyone gets tested.

"If the test kits will be available, the testing process for all staff will end this week,” he said.

Public health officials said they charge Sh2,000 per person if an institution requests for testing, but added that mass testing or contact tracing, is free.

Makarani had earlier said they consulted the Ministry of Health and decided that they should be tested if positive cases were reported from the institution.