Creation of Prime Minister position, restructuring of IEBC are among proposals.

•The famous handshake between President Uhuru Kenyatta and ODM leader Raila Odinga at the footsteps of the Harambee House was a moment that crystallised the constitutional imperative to seek peace, security and unity across the country.

•The move set in motion a process to identify the comprehensive changes that would strengthen the Rule of Law while uniting  Kenyans, deepening constitutionalism and launching a comprehensive reform process to consolidate the momentous opportunity. 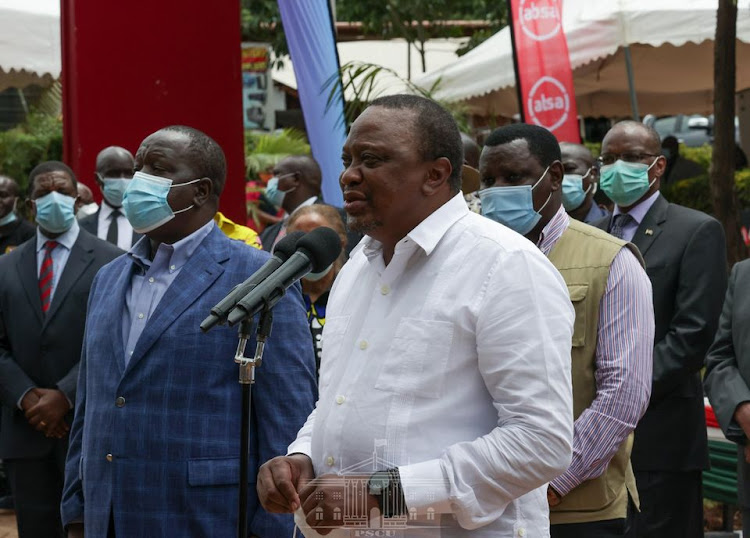 Interior CS Fred Matiang'i, President Uhuru Kenyatta and other government officials during the receiving of the BBI report in Kisii on October 21, 2020.
Image: PSCU

In March 2018, two leaders and rivals, representing the ruling party and the opposition, shook hands to unite the country.

The famous handshake between President Uhuru Kenyatta and ODM leader Raila Odinga at the footsteps of the Harambee House was a moment that crystallised the constitutional imperative to seek peace, security and unity across the country.

The move set in motion a process to identify the comprehensive changes that would strengthen the Rule of Law while uniting  Kenyans, deepening constitutionalism and launching a comprehensive reform process to consolidate the momentous opportunity.

Two years later, a task force that was gazetted through the Building Bridges Initiative has come up with a report recommending various reforms.

Following the analysis of the views presented and thereafter validated by Kenyans, the Steering Committee proposes to amend:

Chapter Two of the Constitution on formative aspects of the Republic to address regional integration, cohesion, shared prosperity and the centrality of the economy.

This is in order to harness regional trade, investment and people-to-people links to increase Kenya's prosperity, opportunities for investment and enhance  security.

Chapter Three on Citizenship to strengthen the national ethos by outlining the responsibilities of citizens. The amendment is informed by the understanding that the current Constitution has rightly imposed various socio-economic duties on the state but does not envision any responsibilities on the part of the citizen.

Chapter Four on the Bill of Rights to provide a constitutional underpinning for the privacy of citizens’ personal data as an emerging area in human rights owing to significant technological developments in this area.

Chapter Six on Leadership and Integrity to intensify the fight against corruption by strengthening the relevant institutions. This includes providing a mechanism for more expeditious conduct of investigations, prosecution and trial of corruption-related matters.

Chapter Seven on Representation of the People to resolve issues of divisive elections arising from electoral processes. The proposed amendments seek to:

i. Enhance the transparency and fairness of representation in the electoral system.

ii. Reform the management structure of the Independent Elections and Boundaries Commission(IEBC).

iii. Promote electoral competition based on ideas, values and our shared humanity rather than the common-enemy identity politics that have defined our electoral cycles to date.

iv. Promote gender equity in governance by actualising the Constitutional provision of the two-thirds Gender Rule on the elective and appointive office.

v. Implement the provisions of Articles 81(d) and 89(7) (b) of the Constitution, which mandate that the electoral system is to comply with the universal principles of fair representation, equality of the vote, and the requirement that the IEBC, in setting constituency and ward boundaries, should progressively work towards ensuring that the number of inhabitants in each constituency and ward is, as nearly as possible, equal to the population quota.

Chapter Eight on the Legislature to undertake the following: Remodel the Parliamentary system by bringing the government back into the House, including the Prime Minister, Deputy Prime Ministers, Cabinet Ministers, the Attorney-General and the Leader of the Official Opposition, being the person who was the runner-up in the Presidential election.

Chapter Nine on the Executive by expanding the national executive in order to promote greater inclusivity, and mitigate the drawbacks of the winner-takes-all electoral formula.

It also provides that Cabinet Ministers may be appointed from among members of the National Assembly.

The Committee makes this recommendation cognizant of the provisions of Article 77(1) of the Constitution of Kenya which bars state officers from receiving emoluments for more than one role.

Chapter Ten on the Judiciary to enhance judicial accountability to the people of Kenya.

This means that while the independence of the Judiciary must be protected as a fundamental principle, the Judiciary should equally be accountable in a clear manner to the sovereign will of the people of Kenya.

It is therefore proposed to introduce the independent office of the Judiciary Ombudsman, who shall sit on the Judicial Service Commission.

Chapter Eleven on the Devolved Government by making the following changes:

i. Creating a County Ward Development Fund to be governed by statute.

ii. Increasing the resources to the counties from the current 15% to at least 35% of the last audited accounts and ensuring that the focus is on service delivery in the settled and serviced areas, including for people living near the furthest boundaries of each County.

iii. Embedding the monitoring, implementation and impact assessment of Article 43 rights in the president's State of the Nation address and in the budgeting process.

iv. Ensuring greater inclusivity, fairness, equity and accountability in the distribution of resources.

Chapter Twelve on Public Finance to streamline public finance principles and processes to promote efficiency and ensure expenditure is directed to maximising utility.

The proposals give special attention to the actualisation of the rights guaranteed under Article 43 as well as strengthening devolution.

Chapters Thirteen, Fourteen and Fifteen to ensure that the Public Service, National Security agencies and Commissions and Independent Offices are not only strengthened but also:

i. Are accountable to the people of Kenya.

ii. Have internal accountability systems that clearly and transparently separate the power of appointment and promotion from that of interdiction and censure.

iii. Carry out rigorous audits that inquire into value for money and ensure that sound principles of public finance management apply to every arm of Government and every public institution.

Chapter Sixteen on General Provisions to define new terms introduced by other proposed amendments.Third Schedule on National Oaths and Affirmations to make provision for the oaths to be administered in respect of state officers for whom such requirements had been omitted.

Some politicians claim the war on corruption is designed to go after them.
News
1 year ago
by PATRICK VIDIJA Investigative Journalist
News
21 October 2020 - 16:22