Kopia Kenya project will run in phases of three years and farmers will be trained on best technologies and production practices. 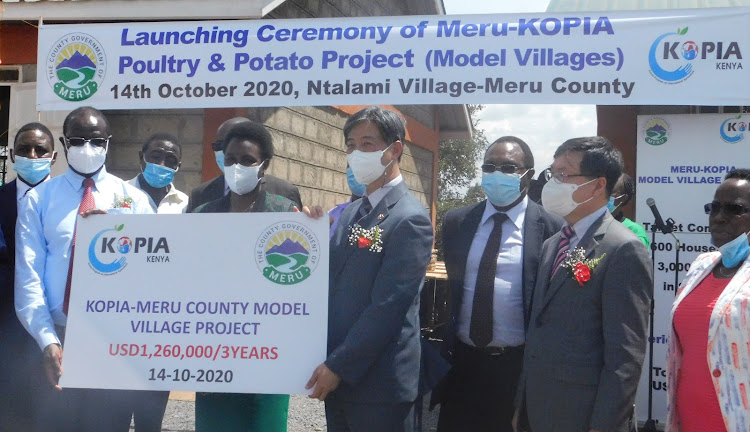 The project was launched by Governor Kiraitu Murungi's administration in partnership with Korean officials on Wednesday at Ntaalami village in Kianjai ward, Tigania West. Korean Ambassador to Kenya Yeonghan Choi was among those present.

The Korea Programme on International Agriculture (Kopia Kenya) will run in phases of three years, where farmers will get training in the best technologies and production practices.

Choi told the farmers that Korea was once a poor nation faced with war and poverty but it is among the developed countries in the world today.

“Korea experienced the same challenges as Kenya and this is why we are here to share the experiences because we have achieved economic development. This is the first step for to a better future.

"It is important to make the project sustainable and so farmers must operate and manage the facility to keep it working. The fruits of the project will make Meru great. It will increase income to the selected Meru villages,” Choi said.

Kiraitu said the Korean ambassador was the first to agree to push and support his dream of uplifting the people of Meru, which is why he successfully lobbied for the project that will have a great impact on the society.

“I admire their republic since my visit in 2012. I discovered Korea had a similar war like Kenya in 1950 but they liberated the country and now they are among most developed countries. I want people to be rich.

"I will continue seeking markets for chickens and eggs. We can start a chicken butchery to market them to the world. We will plan to have a potato processing factory too,” Kiraitu said.

Deputy Governor Titus Ntuchiu said the Korean government is carrying on other projects, adding that it is a matter of time before Meru becomes a changed society.