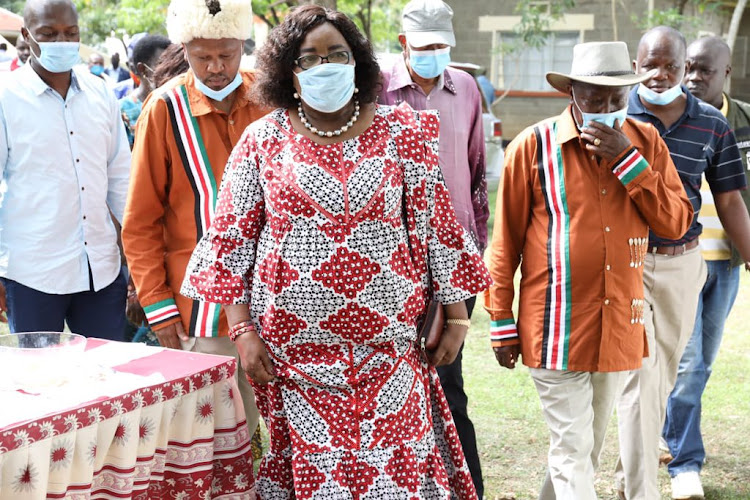 Hundreds of Kikuyu elders endorsed Raila for president on Saturday.

The massive voting population of Mount Kenya and Rift Valley has twice handed victory to Ruto and President Uhuru Kenyatta and the new political realignments may wreck the DP’s political machine.

This has been made worse by the growing animosity between the Uhuru and Ruto, demonstrated by the seating arrangements during inter-faith national prayers at State House on Saturday.

The President and his deputy who always used to sit side-by-side were for the first time separated by First Lady Margaret Kenyatta.

At the end of the service, the country’s top two leaders left by separate exits.

As the drama quietly played out at State House, a historic meeting between the Kikuyu elders and the Luo was going down at Raila’s Bondo home.

Ndaragwa MP Jeremiah Kioni, who was among the select MPs from Mt Kenya who attended the meeting, confirmed that the Luo-Kikuyu unity is geared towards backing Raila for president in 2022.

“What is not in doubt is that Central Kenya will not field a presidential contender in 2022. That is why we are coming together and working on a different formula,” Kioni said.

“I can tell you that the alliance we are building is the one that will shape the 2022 succession matrix.”

The Luo elders and select political leaders will also be hosted for the second part of the meeting in Nyeri county on October 30, in what Ruto's critics say will declare the end of the DP’s marriage with Uhuru.

“Once we have united the two communities — Luo and Kikuyu — it will be easy to work with other communities to be a formidable force in 2022,” veteran politician Maina Kamanda said.

The nominated MP told the Star that while other communities will not be isolated in the new alliance, “Ruto's remote chances of winning any support in Mt Kenya will go up in smoke.

“We are after the unity of the entire country and we are looking beyond 2022. Ruto is now a paper tiger in Central Kenya, he has been obliterated completely,” the ex-Starehe MP said.

Igembe North MP Maoka Maore termed the elders' meetings historic and said they are clearing the path for long-lasting unity that will shape the country's 2022 succession politics.

“The Mt Kenya region is ready for Raila and Kenyans should start preparing because he is the only leader who is fit to succeed President Uhuru Kenyatta,” the National Assembly majority whip said.

Maore said Kenyans cannot afford to elect a president who would antagonise other regions and fail to secure Uhuru's legacy.

“It is going to be a tall order for Ruto to convince Mt Kenya that he has the credentials to protect the President's legacy projects – the new alliance being built will vanquish him completely.”

However, Ruto’s allies maintain Raila still has no place in Central Kenya.

“Coming together to gang up against the hustler nation just because Ruto was born of a peasant father is retrogressive politics. Mt Kenya will vote based on their conscience without any intimidation,” Kiharu MP Ndindi Nyoro said.

“They can gang up the way they want but Kenyans will speak loudly in favour of the hustler nation in 2022.”

Heavyweights from the region, including former Gatanga MP Peter Kenneth and Kirinyaga Governor Anne Waiguru have aligned themselves with the Raila-Uhuru axis.

Seen as Raila's possible 2022 Mt Kenya pointman, Kenneth was among more than 500 elders and prominent personalities who visited Raila's Bondo home on Saturday.

An analysis of the 2019 Population Census shows Uhuru's backyard will play a key role in determining who will win the 2022 General Election.

The President’s community is the largest in the country with a population of 8.12 million, outnumbering the second largest ethnic group, the Luhya, by more than 1.3 million people.

The Kikuyu ethnic community is also home to some of the counties with high numbers of people, most of them youths who will be eligible voters in 2022

Central Kenya was decisive in Uhuru's presidential victory in the 2013 polls, garnering over 2.6 million votes in the Kiambu, Murang'a, Nyandaraua, Nyeri and Kirinyaga counties, against Raila's 189,000 votes.

In the 2017 polls Uhuru garnered 2.3 million votes in the five counties while Raila trailed with 19,963 votes.

With the Building Bridges Initiative process likely to herald radical changes to the country's governance architecture, Raila could use the new posts created to appease Uhuru's backyard.

The DP and the yet-to-be-created prime minister's position would be influential posts that presidential candidates would dangle to seek other communities' support.

On Sunday, Ndaragwa MP Jeremiah Kioni, one of the prominent MPs from Central Kenya who attended the Bondo meeting, told the Star Mt Kenya will not field a presidential candidate.

The newly found Luo-Kikuyu political path could stir up the 2022 succession battle and further damage Ruto who is already an outsider in his own government.

Kioni suggested that the thawing of ties between the Luo and the Kikuyu - the two communities that have antogonised each other for years - will promote the country's stability.

He said that the meetings would end the suspicion and mistrust that has existed between the Kikuyu and the Luo communities since Independence.

“I wish these meetings would have taken place much earlier to create an understanding between the two communities, so the Kikuyu can no longer see Luos as a threat to their business interests,” Kioni said.

On Saturday, hundreds of Kikuyu elders made a historic trip to Raila’s Bondo home - popularly known as Kango Kajaramogi — where they declared Raila the community's 2022 choice.

The meeting, the first of its kind, was the clearest indication that influential figures close to State House are keen on backing Raila and not Ruto for the country’s top job.

Kikuyu Council of Elders chair Wachira Kiago said elders from the two communities entered a Memorandum of Understanding that will see them work together, with the support of elected leaders from Mt Kenya who want to end political divisions

The elders warned members of the two communities and their leaders against going against the MoU, saying they they risk unspecified consequences.

"We are not merely writing our MoU on a piece of paper. We have performed a cultural ceremony that's binding to illustrate how serious it is to us," Kiago said in Bondo on Saturday.

"We are inviting Raila to Central and will introduce him officially to our people to cement this unity."