Documents in question are Busia county procurement plans. But the DPP has denied such claims.

• Ojaamong had claimed that the DPP is misleading the court by concealing documents likely to tilted the court's mind in determining whether or not they have a case to answer.

• The county chief was in 2018 charged with abuse of office and other corruption related offences. 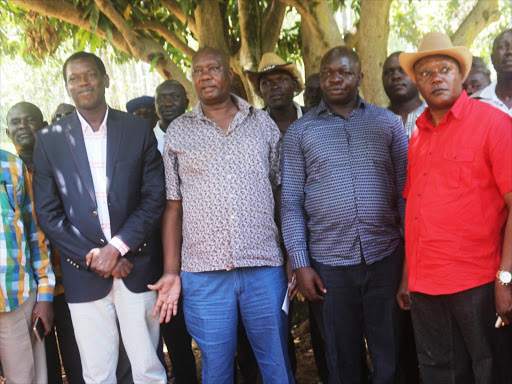 In an affidavit, prosecution counsel Grace Murungi says Ojaamong and eight other were found they have a case to answer based on the totality of the evidence on record.

Ojaamong had claimed that the DPP is misleading the court by concealing documents likely to tilted the court's mind in determining whether or not they have a case to answer.

He also claimed that the investigating officers, who were prosecution witnesses, admitted to being in receipt of several documents that were relevant to the case but chose not to supply to defence or produce them in court.

The documents in question are Busia county procurement plans. But the DPP has denied such claims.

“I believe this petition is a last ditch effort by Ojaamong to avoid or abort their trial before Magistrate Douglas Ogoti, which they desperately seek to avoid at all costs due to their inability to mount any credible defence to the charges they face there and the evidence presented against them during the course of the trial,” Murungi said.

The county chief was in 2018 charged with abuse of office and other corruption related offences. He is accused of unilaterally signing an MoU with Madam R Enterprises Ltd in a project for a solid waste management system without due regard to procedural framework governing the management of public finances and projects, leading to loss of Sh8 million. He is charged alongside Madam R and other county officials.

Prosecution called 20 witnesses and closed its case on February 20 this year. Ojaamong and his co-accused were subsequently placed on their defence. The defence case started on July 20 with the testimony of Ojaamong and his witnesses.

The county chief later raised issues with Taib’s line of questioning his witness Jairus Oriko. The issue arose after he said “in fact after observing the witness, I am going to recommend to the investigating officers why they did not actually go for this guy."

As a result of such threats, Ojaamong says a key witness who had already been identified and confirmed has since abandoned him and expressed his willingness to appear.

The witness is Moses Osia, currently in active service at Busia county. Osia has abandoned the process due to fear of victimisation by the prosecution.

The prosecution now says Taib uttered the words after he observed the demeanours of the witness and the responses he had given to questions put to him in cross-examination.

They have denied intimidating the witness saying the words spoken by Taib were meant to stress the importance of testifying truthfully as he had opted to give sworn evidence.

The DPP also says the defence has not proved that a key defence witness, one Moses Osia, has failed to come to court due to the alleged threats. Case will be heard October 19.