• Centum Investment has pledged to take up the program and has already started building affordable housing units. 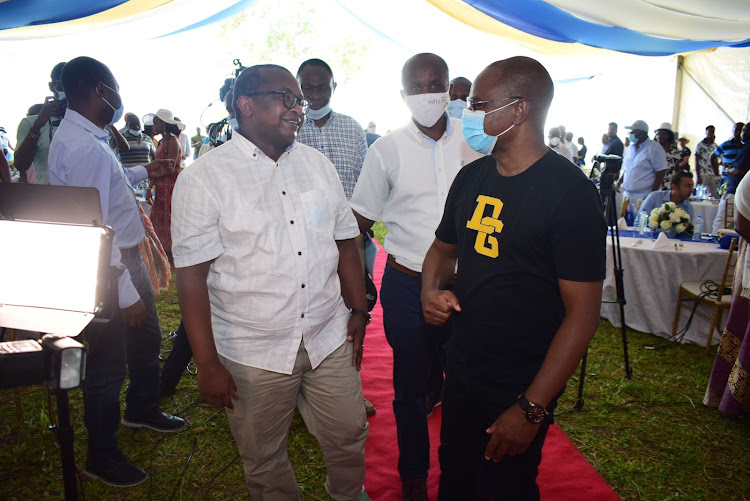 HAPPY WITH PROJECT Housing PS Charles Hinga and Kilifi Governor Amason Kingi at the launch of the Awali Estate in Vipingo on Saturday.
Image: BRIAN OTIENO

Housing PS Charles Hinga on Saturday said the completion of Awali Estate, a project by Centum Investment Company at Vipingo, three months ahead of schedule, is a boost to investor confidence in local developers.

“We were wondering whether we are ever going to get local developers, who are credible enough, that are going to bite, and Centum did,” said Hinga.

He spoke at Vipingo during the handover ceremony of 70 of the 74 units to its owners.

The government plans to put up 500,000 units in the Affordable Housing pillar of President Uhuru’s Big Four Agenda, which PS Hinga said will cost Sh1.2 trillion.

“The government cannot afford that at the moment,” said the PS.

Hinga said the Affordable Housing programme is difficult because it faces a lot of systemic challenges.

“If one of them is of, for example, land, titling, processes and financing, it can completely derail the programme,” said Hinga.

Centum Investment has pledged to take up the programme and has already started building affordable housing units.

It is expected to be completed in the first quarter of next year.

Vipingo Development PLC is the company that constructed Awali Estate, a Sh1.2 billion project, which will see a three-million-litre capacity water desalination plant constructed to serve the Awali Estate and other estates which will be coming up at the proposed Vipingo City.

Awali Estate, made up of Sh13 million and Sh17 million maisonettes and bungalows, boasts of modern and reliable amenities including beautifully manicured gardens, a swimming pool, children play areas, jogging tracks, card access control and reliable water supply from one of the largest.

Construction of the 74 units started in January 2019 and already five families live in the estate.

Apart from the desalination plant, the estate will see construction of a 10,000 square metre mall and offices also set to open in the first quarter of next year, a 250-acre Industrial Park and fully-serviced residential plots.

“Combined, the projects have created over 1,100 construction-related jobs, catalysed economic activities, and positioned Vipingo as a top investment destination along the Kenyan Coast with direct flights to Vipingo from Wilson increasing to two per day,” said Vipingo Development PLC managing director Kenneth Mbae.

Centum Investment Company CEO James Mworia said they acquired over 10,000 acres of land in Vipingo and less than 100 acre have been developed, living room for construction of the Vipingo City.

“Our projects are market-led,” he said.

“We believe in our clients getting value for money, And in the end Vipingo City will be competing with Mombasa city,” said Kirubi.

Kilifi Governor Amason Kingi said since the beginning of the project in 2018, the land value in Vipingo has gone up by 15 per cent.

He said it is the private sector that will drive the Affordable Housing agenda adding that the national and county governments do not have the kind of financial muscle to drive the programme.

“Demand for affordable housing is there as shown by the 440 units that have already been taken at Palm Ridge Estate, which I am proud to reveal that most of officers in my administration have taken up,” said Kingi.

He said with increase in confidence in local developers more jobs will be created.

PS Hinga said most local developers were not delivering projects in time and to expectation but things are changing.

“Now we are seeing a new crop of local developers who are giving us confidence,” he said.

The main contractors of the 10,000-acre Centum land in Vipingo are Landmark Holdings, a Kenyan company.

CEO Harveer Singh Sethi said they are excited to be entrusted with such a huge project.

“We will deliver beyond expectation,” he said.

Former PS Bitange Ndemo, who is the Vipingo Development PLC chairman, said the project was first approved by the board in May 2018.

"Ground breaking was done in January 2019 and we have finished the project three months ahead of time frame," said Ndemo.

Kingi said the Vipingo project is an investment magnet in the region.

Already, the county has approved construction of a state-of-the-art hospital in Kikambala, a 60-storey hotel in Watamu, among other investor-confidence boosting projects.