•The announcement was made following a Cabinet meeting chaired by Uhuru on Thursday.

•Members of the multi-agency team will include representatives from the Interior ministry (the convenor), ICT, NIS among other agencies. 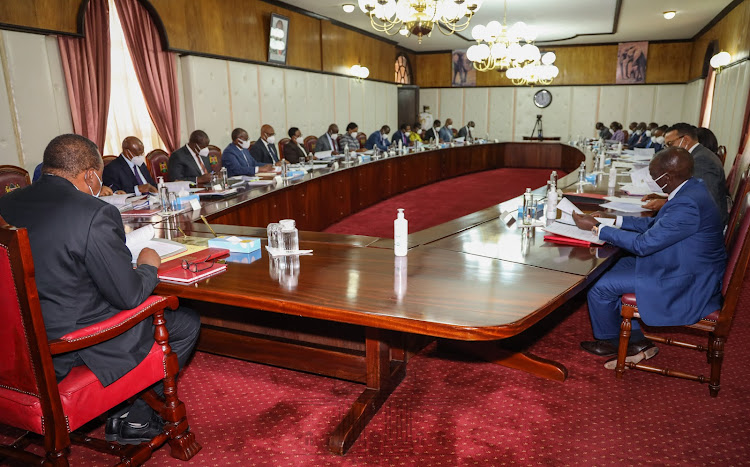 The Cabinet has approved stringent measures invoked by the National Security Advisory Committee to contain early campaigns ahead of the 2022 General Election.

The meeting chaired by President Uhuru Kenyatta on Thursday said it noted with concern the growing political tensions that have threatened peace, security and harmony within the country.

“This fast-evolving situation threatens to derail the delivery of the administration’s transformative agenda for the country,” a Cabinet dispatch stated.

The Cabinet warned that the heated political activities could jeopardize Kenya’s image and place within the community of nations, being that the country is a non-permanent member of United Nations Security Council.

The Cabinet approved the establishment of a Multi –Agency Team on Public Order to be convened by the Ministry of Interior.

Others are the National Cohesion and Integration Commission; ICT Authority; and Communication Authority of Kenya.

The National Security Advisory Committee (NSAC) will be the secretariat in charge of the team expected to monitor, document and enforce compliance with the directives.

"The primary term of reference for the Multi-Agency Team on Public Order shall be to monitor, document and enforce compliance with the prescriptions and directives with respect to the conduct of allpublic meetings and processions; the permitted processes for media broadcasting, publishing and reporting; and the responsible conduct of persons using social media."

The orders would affect all public meetings and processions; media broadcasting, publishing and reporting; and the responsible conduct of persons using social media.

On Wednesday, the state moved to slam the brakes on Deputy President William Ruto’s 'hustler' campaigns, accusing him of taking advantage of vulnerable youths to polarise Kenya.

In an indirect reference to the DP’s meetings, the National Security Advisory Committee warned against campaigns that it said were being used to incite millions of jobless youth.

“Sadly, some individuals are taking advantage of the vulnerabilities in our population occasioned by the socioeconomic shocks of Covid-19,” Head of Public Service Joseph Kinyua said.

The DP has used the hustler narrative to fire up his frenetic 2022 presidential campaign in what is seen as a direct political affront on President Uhuru Kenyatta and his political soulmate Raila Odinga.

Ruto has been dishing out goodies to hundreds of youths, from wheelbarrows to motorbikes, while asking them to shun the political elite whose parents had been at the helm of power.

In a clear signal that Uhuru and Ruto’s relationship is irretrievably broken, the top security advisory organ indirectly blamed Ruto for incitement.

“These individuals, in an attempt to further their selfish agenda, are inciting the youth who are fearful of their future. They are attempting to radicalise the youth to the point where they have fought and in one tragic incident killed each other,” Kinyua said.

“The unchecked utterances and political weaponisation of public gatherings continue to undermine law and order within the country. This disregard of the law has triggered violent confrontations among different groupings, thus threatening national security.”

NSAC fired a warning salvo to those whose campaign messaging they said attacked personal rights that may trigger discrimination based on economic status.