•Kinyua urged Kenyans to report to authorities any incitement offence and called for respect of the freedom of expression of other people.

"•Not propagate insurgency and hostility among Kenyans. Observe the well being of everyone present. 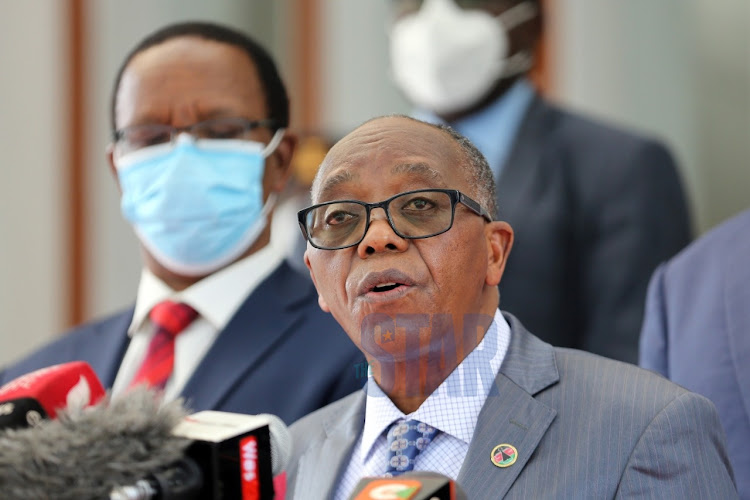 Head of Public Service Joseph Kinyua addresses the media on National Security in the country on October 7, 2020.
Image: FREDERICK OMONDI

Head of Public Service Joseph Kinyua has directed that all public meetings be held in compliance with the Public Order Act, failing which culprits will be penalised.

"A convener or any person intending to hold meeting shall notify the officer in a commanding station three days to but not 14 days before the procession," he said.

Speaking during a press conference on Wednesday, Kinyua said politicians are inciting and trying to radicalise the youth.

"...be present throughout the meeting and shall assist the police in maintain law and order," he said.

"At all times bind themselves to be peaceful and keep to the designated areas. Any person who wants to attend a meeting shall exercise civic duty and not be in possession of any weapon."

He noted that all persons who elect to address any public meeting and procession shall be bound by the legal penalties.

Two people were killed in the chaos.

Kinyua urged Kenyans to report to authorities any incitement offence and called for respect of the freedom of expression of other people.

"Not propagate insurgency and hostility among Kenyans. Observe the well being of everyone present.

H further said media will be held responsible for all the content they publish that has hate speech.

"Media shall not publish words that incite ..Practice responsible and sensitive reporting. Air programmes that airs national unity and cohesion," he said.

"Social media will be held liable for all their contents on preventing undesirable political messages."

Kinyua said any social media user shall ensure that all their content is written in a a language that avoids autonomy.

"Before sharing any messages, authenticate it," he said.

He said the unchecked utterances and political weaponization of public gatherings continue to undermine law and order within the country.

"This disregard of the law has triggered violent confrontations among different groupings, thus threatening national security," he said.

On Sunday, rival Jubilee factions Kieleweke and Tangatanga clashed during  Ruto’s visit to Kenol in Murang’a county, leaving a trail of bloodshed and destruction.

ODM leader Raila Odinga said there was a need for peace-loving Kenyans to be more concerned, cautioning that the seeds of 2022 poll violence are being planted now.

Raila said the chaos that left two people dead and scores of others injured was a product of machinations by politicians who want to use unorthodox means to take power in 2022.

But Ruto has distanced himself from the clashed and asked the police to hold to account those behind the Murang’a violence.

Speaking from his Karen residence on Tuesday, Ruto said the security has details of the perpetrators and should take action against them.

Said stern action awaits any person involved in planning of such unlawful acts.
News
1 year ago

"Those who sent goons to unleash teargas were sent by leaders working under us" - DP.
News
1 year ago

Families of those killed in Kenol fracas demand justice

Say the two were not part of the factions but were caught up between the fighting groups
News
1 year ago
by NANCY AGUTU Deputy Digital Editor
News
07 October 2020 - 15:48