Uhuru and Raila are alleged to be the complainants in a case two suspects are charged under the Computer Misuse and Cybercrimes Act. 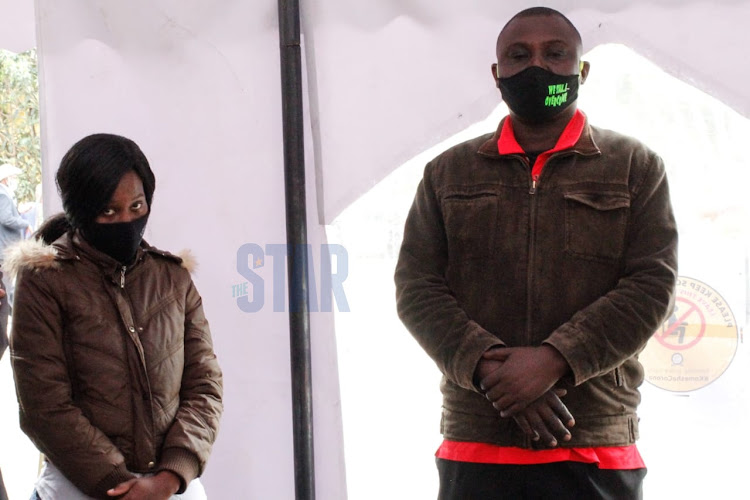 CHARGED: Janet Magoma and Patrick Rading appear before magistrate Bernard Ochoi on June 17, 2020 charged with taking CCTV footage of the President while in the CBD
Image: ENOS TECHE

A Nairobi court has directed the Director of Public Prosecutions to supply the defence with witness statements of President Uhuru Kenyatta and Raila Odinga on October 29.

Milimani senior principal magistrate Benard Ochoi on Tuesday said the case where two IT officers were charged with unauthorised interception will be mentioned on October 29 in open court and he will give directions on the CCTV footage presented before court.

“The next mention date I will give directions on the CCTV footage provided. The prosecution to provide statements from Uhuru and Raila,  if any, as well as the amended charge sheet, if any,” the magistrate said.

Patrick Ambongo and Janet Magoma were IT officers working for Sarova Stanley hotel. They reportedly lost their jobs after they were charged.

Uhuru and Raila are alleged to be complainants in a case in which the two suspects are charged with the offence of unauthorised interception of computer data contrary to Section 17(1) of the Computer Misuse and Cybercrimes Act.

In July, defence lawyer Danstan Omari told court that one of the accused persons, Magoma, was apprehensive and psychologically traumatised and feared for her security.

"We had requested statements from the complainant who is the President of this country and Raila Odinga who were alleged to have been in the entourage but up to date those statements have not come," Omari said.

He added that they also want to be supplied with the original clip that captured the entourage.

Raila was allegedly captured touring the CBD with Uhuru in the footage on June 2. Omari had argued that taking such a footage was not a security risk as his clients were "just being patriotic Kenyans".

It is alleged that the two on June 2 at around 8.20pm in Nairobi, jointly and without authorisation, intercepted CCTV footage capturing Uhuru's entourage along Kenyatta Avenue.

The state did not oppose their release on bail but challenged the defence to produce evidence showing they had lost their jobs as alleged.