• The chaos led to the loss of two lives and several people were left with injuries.

• Deputy President William Ruto has accused people within Jubilee of being behind the chaos witnessed at Kenol, Murang'a, on Sunday. 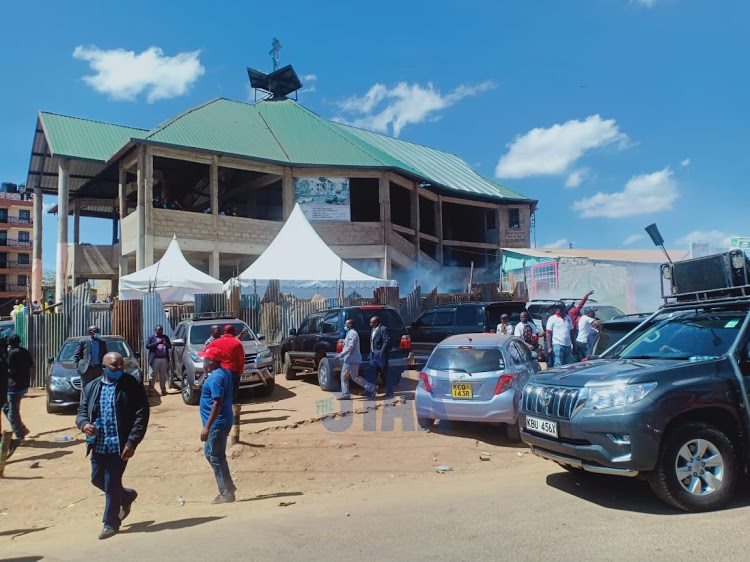 The Inspector-General of Police Hilary Mutyambai has instructed the Director of Internal Affairs Unit (IAU) and two senior DCI officers to investigate the scene witnessed on Sunday.

The opposing groups clashed into each other on Sunday morning in Kenol, Murang'a as Deputy President William Ruto and his allies toured the area.

The chaos led to the loss of two lives and several people were left with injuries.

The IG has urged the politicians to desist from engaging in inciteful utterances and acts that might lead to the fracas.

"Stern action will be taken against any person engaging in planning and executing unlawful acts, " Mutyambai said.

He added that the National Police Service remains committed to working within the law in discharging its mandate.

Ruto has accused people within Jubilee of being behind the chaos witnessed at Kenol, Murang'a, on Sunday.

"Watu waliotuma watu kutuma teagas ni watu wanaofanya kazi chini yetu. (Those who sent these goons to unleash teargas on us were sent by leaders working under us.)," he said.

The DP added that "The Jubilee administration is a product of kneeling and prayer before many alter in Kenya. It can not be the same administration that is now going to teargas the church and disgrace our alters in Kenya."

He spoke on Sunday after a church service at AIPCA church in Kenol which began in chaos as pro-Tangatanga and pro-Kieleweke groups clashed.

It is alleged that two buses ferrying youths landed in the area early in the morning and proceeded to the AIPCA church before starting to throw stones into its compound.

This in turn angered Kenol residents who came out in large numbers and repulsed the youths towards the Kenol-Thika highway where they eventually cornered and beat them up.

Fire, chaos at Kenol ahead of DP Ruto's visit

One man was beaten to a pulp and became unconscious.
News
1 year ago

"Those who sent goons to unleash teargas were sent by leaders working under us" - DP.
News
1 year ago
Post a comment
WATCH: The latest videos from the Star
by KEVIN CHERUIYOT Online Journalist
News
04 October 2020 - 16:59
Read The E-Paper