President's operatives outwit the DP to avert a bruising showdown in Msambweni ahead of BBI. 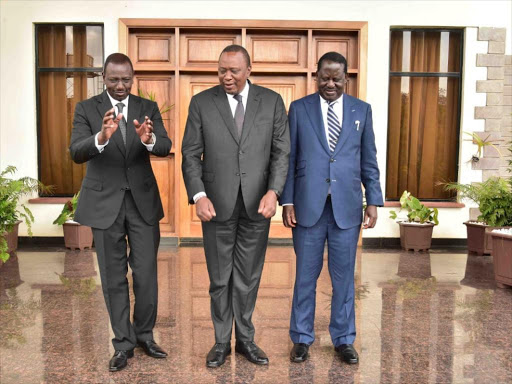 Deputy President William Ruto when he hosted President Uhuru Kenyatta and Opposition leader Raila Odinga at his Karen residence in Nairobi during a past event.
Image: FILE

The elaborate scheme hatched behind Ruto's back is yet another clear signal that the DP no longer has power in Jubilee in what may pose a tough political test to his 2022 presidential bid.

The Star has established that the DP unsuccessfully tried to scuttle a press conference by Jubilee secretary general Raphael Tuju and had for the second time to make a trip to Jubilee headquarters in Pangani.

However, by the time Ruto was getting to Pangani alongside his candidate for the by-election, Tuju had already released a statement that the ruling party would not field a candidate.

Tuju said the move was in the interest of the “bigger picture” that puts into consideration the cooperation between Jubilee and ODM party that previously held the seat.

“This announcement has been made in good time so that any aspirant who has interest in a Jubilee ticket still has other pathways to running for this seat,” Tuju said at a press conference moments before Ruto arrived.

The tightly-knit plan caught Ruto off-guard, forcing him to reluctantly pull out of the by-election.

This will now hand Raila an easy ride to capture the seat and consolidate his support in his crucial Coast bastion.

But while the President's men succeeded in cornering the DP in the by-election, Ruto fired a salvo at Jubilee officials saying the party would henceforth field candidates in every election.

“...going forward we will ensure that the party participates, as it should, in all elections across the country,” the DP said at a press conference at the Jubilee headquarters.

The DP who spoke after a two-hour meeting with Tuju insisted he would have wanted the party to participate in the Msambweni by-election set for December 15.

However, he said, given that a decision had already been made and communicated to the public over Jubilee's non-participation he would abide by that.

“I was of a different view that the party fields a candidate in Msambweni and they (party officials) had a different view...but because a decision has already been made and communicated, we will all stand by that decision,” Ruto said.

He went on: “I have had a meeting with the secretary general and his officials here on the by-election. They have briefed me on the decisions that have been made and I am satisfied with what they have planned.”

Ruto said that by not fielding a candidate in Msambweni Jubilee was not shrinking but expanding and that “ no impression should be created that the party is folding up.”

The Star has established that Tuju snubbed Ruto at Jubilee headquarters on Tuesday evening as the President's men raced against time to get the party leader's nod on pulling out of Msambweni.

The DP returned on Wednesday at 2pm and after a two-hour meeting with Tuju  he left no doubt he was spoiling for a Jubilee-ODM contest in Msambweni.

His lengthy meeting with Tuju and a section of party officials came moments after the SG announced that the party would not participate in the Msambweni by-election.

Ruto arrived for a face-to-face meeting with Tuju, an influential figure within Uhuru's camp and who has successfully executed a plot that has cut the DP down to size.

In his statement, Tuju also cited the advisory by Chief Justice David Maraga to the Head of State to dissolve Parliament as one of the reasons why the party pulled out of the poll.

“In other words, the country has very serious constitutional matters to deal with that will require sobriety and reaching across the political divides in order to navigate our beloved country across some of these challenges,” he added.

Signalling that he could be down but not out of the grueling Msambeni by-election, Ruto urged aspirants who wanted to vie on the Jubilee ticket to either run as independents or join other parties.

Tellingly, Sharlet Akinyi Anyango (Mariam) who on Monday resigned as a member of Raila's ODM party stood next to the DP during the presser in what was seen as a warning shot to Raila.

She protested that she was ready for the Jubilee ticket.

"I am saddened by Tuju's decision. This is unfair to me," she said after Ruto had left the presser.

There are reports that Ruto was fronting Mariam in what could have evoked memories of the political showdown in the Kibra by-election on November 7 last year.

Ruto had bulldozed his way through the Jubilee Party and forced footballer Mcdonald Mariga who lost to ODM's Bernard Otieno after massive campaigns that forced Raila out of his comfort zone.

Ruto's delegations strategy in Nairobi hotels and at his official Karen residence triggered an earthquake in ODMs' camp which was forced to pull all stops to retain the seat.

It has emerged that the DP was until yesterday determined to have Jubilee field a candidate in the poll to flex his political muscles in Raila's stronghold.

However, a secret advisory by Tuju to Uhuru late on Tuesday evening sealed a deal for Jubilee to withdraw from the by-election in favour of Raila.

Raila has gained unprecedented influence within government despite holding no official position at the expense of Ruto who has been boxed out of state power.

Raila is seen as President Uhuru's key man and Jubilee's decision to pull out of Msambweni is part of a strategy to keep the handshake alive ahead of the release of the BBI report.