• The Teachers Service Commission on Monday indicated teachers are expected back in school by September 28, though Education CS George Magoha is yet to announce the exact date learners will return.

•When the country confirmed the first case of the virus on March 13, many parents embraced the government's directive to shut schools for safety reasons. 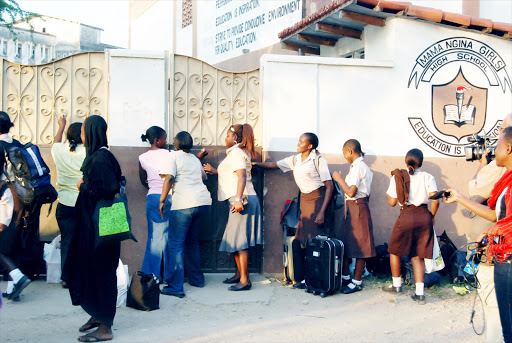 Plans to reopen learning institutions are gaining momentum in the country, six months after the unprecedented novel coronavirus rocked the country.

The Teachers Service Commission on Monday indicated teachers are expected back in school by September 28, though Education CS George Magoha is yet to announce the exact date learners will return.

When the country confirmed the first case of the virus on March 13, many parents embraced the government's directive to shut schools for safety reasons.

On Wednesday during the daily Covid-19 briefs, Health CS Mutahi Kagwe said Kenya is showing signs of the curve flattening, but called for caution.

A total of 24,253 people have recovered from the disease.

All the 47 counties in the county have reported cases of the virus with Nairobi leading.

Despite a seemingly flattening curve, parents have a myriad of concerns as they await Magoha's final word on reopening dates.

One of the concerns parents have is about the safety of their children as schools prepare to resume.

Some of the parents who spoke to the Star said that they are not sure about school preparedness to deal with students in the middle of a pandemic.

John Wafula, a father of four (two in secondary schools and two in the primary) has acclimatised to the current situation, taking his children through private coaching with the little amount of money in his pocket.

“Sasa nitafanya aje na hawa ni watoto wangu. Wacha wakae nyumbani hadi shule zifunguliwe (What choice do I have? They are my children so let me stay with them till schools reopen),” Wafula said.

Wafula said he will struggle to raise fees should schools reopen in October as some have speculated.

He said that since schools were closed, his costs have shot up.

“Kama watatulipia school fees, wawapatie masks na hizo vitu zingine zote, mimi nitawapeleka lakini mimi kusema ukweli sina pesa kwa sasa (If they'll cater for the fees, give masks and all other requirements, I'll be happy to take my children to school because as it stands I don't have the money).”

The case is no different for Dorothy Akinyi, who is jobless and has been the breadwinner for her three school-going children.

Akinyi, a waitress, says she earns very little, living from hand to mouth, and has not even been able to buy her children masks.

She said as much as she would like schools to reopen since her children go to a public school, she asked the government to provide them with all the requirements that might be needed.

A number of parents have also expressed their plans to move their children to public schools since raising school fees with the current situation in the country might challenge them.

Recent research conducted by TIFA revealed that the majority of the Kenyans from the sample collected are unemployed with half of them having recently lost their source of livelihood.

The situation has been exacerbated by the virus, indicating that 31 per cent of the unemployed are not earning since they lost their jobs in the last month.

When President Uhuru Kenyatta lifted the cessation of movement into and out of Nairobi, Mombasa, Kilifi, and Kwale, many people left the city.

Some had lost jobs and were only waiting to travel back to their rural homes and start their lives afresh.

As schools resume, those who had moved  upcountry will have to enroll their children in new schools, which is another problem to them.

The fate of students amid the pandemic

After half a year at home, some of the school-going children have been abused and misused, some working as casual employees.

There has also been a rise in pregnancies among students.

Early pregnancies among teens caught the attention of the nation, with the president directing chiefs to be on the lookout.

In August, 50 schoolgirls from Sameta subcounty in Kisii had become pregnant since the outbreak of Covid-19, the case was confirmed by subcounty director of education Kenneth Wesonga.

Some of the students who have spoken with the Star said they are yearning to go back to school and pick from where they left studies at.

Marion Atieno, a standard seven student said that she has lost most of her time being out for six months.

She cannot accept the reality that she will go back to the same class.

“I want to go back to school. If possible, I would like to go to class eight.”

Preparation ahead of reopening schools

“Teachers are free to report back to school anytime from now until Monday in readiness for when schools reopen,” she said.

Magoha had said that the date will be communicated after the larger stakeholders' meeting which will be before September 28 to endorse the recommendations that have been reached.

The government has also allocated Sh1.9 billion to produce and distribute desks to 15 public schools in each of the sub-counties under the Economic Stimulus Programme for Locally Assembled Desks for Schools.

The desks will ensure that social distance is maintained once the schools are reopened.

The CS added that Sh1.9 billion has been allocated under the Economic Stimulus programme, targeting SMEs and local artisans.

TSC tells teachers to return to school by next Monday