• The officers attached to the Deputy President William Ruto have been transferred to Homabay, Mandera and Bondo respectively.

• The move comes after the three were last week grilled over the role they played in the botched arrest of Sudi that left one officer injured. 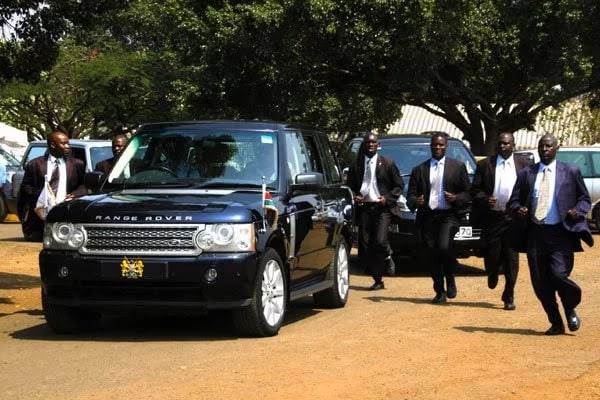 A photo of Presidential Escort officers on duty

The officers attached to the Deputy President William Ruto have been transferred to Homa Bay, Mandera and Bondo.

The move comes after the three were last week grilled over the role they played in the botched arrest of Sudi that left one officer injured.

The incident happened on September 11 when police raided Sudi’s home in Eldoret with an intention of arresting him.

Chief Inspector Amos Ekiru has been transferred to Bondo while the two Constables Issack Dida and Simon Siengo to Mandera and Homa Bay.

Sources within the police say the officers had first been given show-cause letters, before a decision to transfer them was made.

The development comes as their replacements have since been made.

After their grilling last week at the police headquarters, the three officers were given a day to respond to the accusations.

Sources say on returning their written response, they were handed show-cause letters after they failed to explain why and how they were in Sudi’s compound on September 11 when a team of officers arrived there to arrest him.

Preliminary reports indicate that the officers had escorted the DP to his residence, where they handed him over to the GSU officers guarding his Sugoi residence.

They then left to join Sudi at his house kilometers away. It was as they were inside the compound that the police arrived.

The presidential escort officers did not declare who they were at the time. This was even after shots were fired at the entrance of the compound as the team forced their way in.

Sudi to be charged with hate speech, incitement

MP surrendered himself at the Langas police station on Sunday after police said he fled his house to escape a raid.
News
1 year ago

After the officers had gotten into the compound, it emerged that constable  Simon Siengo who had a Ceska pistol S/No. KP 7856 with two magazines of 15 rounds of 9mm ammunition each.

Chief Inspector Ekiru is said to have managed to escape with Sudi from the home, leaving behind his colleagues and juniors who were later arrested.

He switched off his mobile phone but on September 12, he was spotted at the DP’s compound in Sugoi before they left.

The MP was however traced to Nairobi and later to a guest house in Kitale before he surrendered to police in Langas, Eldoret on September 13.

The controversial MP has been charged with three criminal offences relating to offensive conduct and hate speech.

Sudi, who took plea at the Nakuru Central Police Station, denied committing the three offences preferred against him.

He was released on Sh500,000 bail and barred from addressing rallies.

He can appeal decision barring him from addressing rallies.
News
1 year ago
by PATRICK VIDIJA Investigative Journalist
News
23 September 2020 - 16:51