• The proposal follows inquiry into government order on importers to compulsorily use the railway. 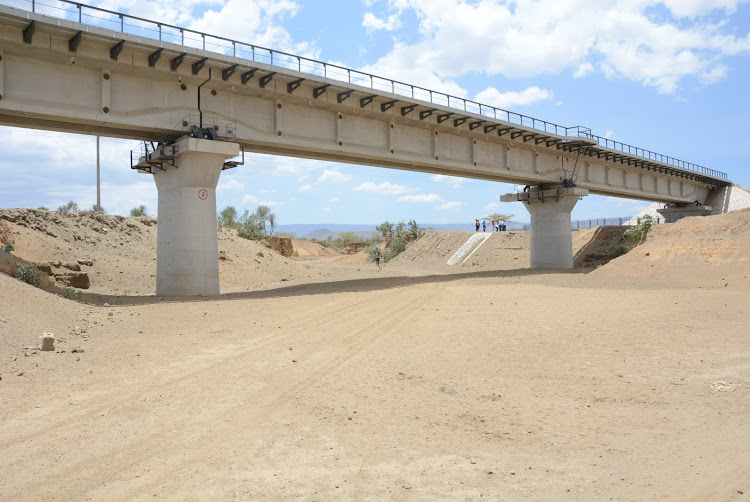 A section of the 120km extension of the SGR from Nairobi to Naivasha.
Image: GEORGE MURAGE

The legislators are also asking the government to draw a non-discriminatory policy that allows private investors to ply trains on the multibillion-shilling railway.

This, according to the Transport committee chaired by Pokot South MP David Pkosing, will promote economic growth in towns along the railway line.

If this is acceded to, private investors will be allowed to extend the railway to their respective yards – at their own cost.

The committee further wants the government to renegotiate the loan terms of the SGR with China’s Exim Bank owing to the Covid-19 associated economic downturn.

In a report tabled in the chamber on Tuesday, the committee said opening up the facility will help turn around its fortunes. That arrangement has worked in the UK and India, it said.

The report followed an inquiry into the government directive on compulsory hauling of imported cargo from the port of Mombasa via the SGR.

The government response was that the order would enable the containment of Covid-19 spread, for which the port was a hotspot.

But Nassir averred that the order contravened the Competition Act and that it was a deliberate push to increase SGR cargo volumes.

According to the Mvita MP, the order was not intended to decongest the port.

Besides opening up the facility to private investors, the committee  recommended that idle KR assets be put to use.

The MPs said those assets should be channelled to Railway Development Fund for SGR loan repayment.

Importers may also get preferential rates for railway development levy at 1.5 per cent of the value of goods.

To encourage the use of SGR, the committee proposed that importers using road transport be surcharged 0.3 per cent – up to a maximum of Sh15,000.

According to the committee, importers should be allowed to nominate a container freight station company of their choice to clear their goods regardless of their final destination.

“Such choice of CFS does not need to be communicated to Kenya Ports Authority as has been the case,” the committee said, supporting Coast leaders’ appeal.

SGR has trouble raising cargo volumes to sustain its operations. The lawmakers say this can change if the line is opened up for competition.

“The government must create a symbiotic multimodal transport system for sustainable economic growth. A competitive rail road complimentary system should be encouraged,” the committee said.

MPs have cautioned the Transport ministry against forcing importers to use SGR citing international maritime laws and WTO treaties.

They hold that KPA has no legal power to compel its customers to use the railway services provided by Kenya Railways.

Kepsa, in its assessment, said it was unfortunate the SGR is yet to achieve the objectives for which the private sector championed in its construction.

The alliance said cargo owners should be allowed to clear their goods at Mombasa Port, Nairobi ICD, Naivasha ICD, Mombasa CSFs or those in Nairobi.

Kepsa sounded the alarm that cargo owners from other countries now prefer other transport corridors because of the cost implication of the Northern Transport Corridor of which SGR is a key component.

“This has been demonstrated by the declining cargo that has been imported through the port of Mombasa recently,” the alliance said.

The current cost of cargo transportation is untenable and will affect the cost of doing business and the country’s competitiveness as a logistics hub, Kepsa said.

KPA says it needs more cargo on SGR owing to a long term service purchase and a “take or pay” agreement with Kenya Railways to guarantee a minimum freight throughput.

The deal, the authority told Parliament, was that the freight generates sufficient revenue equal to or more than the aggregate of cost of operation, and the annual loan repayment.

KPA said that if it does not avail the required freight throughput thus realising revenue below the agreed target, then it shall be required to meet the shortfall.

But the Transport committee rejected this, saying importers should have the freedom to choose how to haul their goods – without restrictions from any government agency.