• He has accused the judge of failing to act on an urgent application he had filed regarding receivership and insolvency proceedings.

• The case pits Tuju against the East Africa Development Bank. 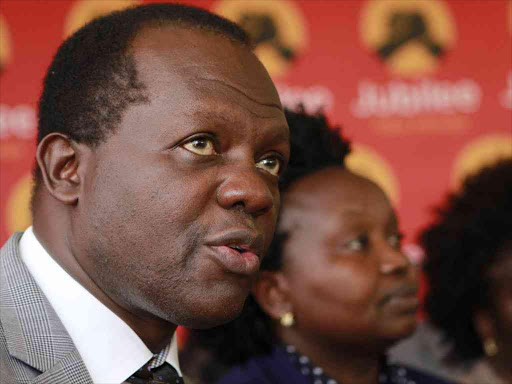 Cabinet Secretary Raphael Tuju has petitioned the Judicial Service Commission to remove Justice Mary Kasango as a judge of the High Court.

Tuju has accused the judge of bias and favouritism while handling the Sh1.5 billion debt case pitting him against the East Africa Development Bank.

He has accused the judge of failing to act on an urgent application he had filed regarding receivership and insolvency proceedings.

In the insolvency case, the bank wants Dari Ltd declared bankrupt for failing to repay the loan advanced to it in April 2015. Regarding receivership, the bank had filed contempt proceedings against Dari Ltd and its directors for preventing the appointed receiver managers from accessing the company premises.

Tuju wanted the two applications suspended pending an appeal before the appellate court. He says Kasango's failure to hear and determine the application cannot be unplanned because the existence of the application was brought to her attention but she chose to completely ignore it.

“The explanation given to my advocates on record is strange, to say the least. It was reported that the Judiciary e-filing system did not pick up the urgent application because it was bundled together with other documents, hence the same was not detected as an urgent matter,” he says.

The Jubilee Party secretary general says by declining to handle an application before her, Kasango's contempt and bias against Dari are clear and are sufficient reason for her removal from office.

“Kasango’s failure to handle the urgent application has occasioned us grave injustice. No reason or justification can satisfactorily explain why this application was not heard with the urgency it deserved. The reasons advanced by the judge are unacceptable.”

He has asked the JSC to have her removed on the grounds of gross misconduct and breach of judicial code of ethics.

On Monday, he asked the judge to recuse herself as he has since petitioned the JSC over her conduct. He made the application through lawyers Paul Nyamodi and Paul Muite.

But Lawyer Fed Ojiambo, acting for the bank, said the application for recusal is yet another attempt by Tuju and Dari directors to delay the hearing of the case.

“It is quite clear that the overall conduct of the plaintiffs in this matter has been to delay the hearing of the dispute while they continue to deprive the bank of its contractual rights.”

Ojiambo said the presentation of a petition to remove a judge before the JSC is not a ground for the Judge to recuse herself.

“My client has been prevented from accessing assets charged to it as security for a debt owed by the plaintiffs through their impunity and continuous disregard for the court orders,” he said.

Ojiambo said allegations of bias should be supported by evidence and Tuju should strictly prove it. The court will rule on the issue on October 21.