Tuju says the DP arrived after he had left but he would enquire if he needed his attention.

• Ruto's deputy director of communications Emmanuel Talam says he was there to check on the "progress of the party".

• Jubilee Party deputy secretary general Caleb Kositany says the DP was at the headquarters to establish the level of preparations for several by-elections. 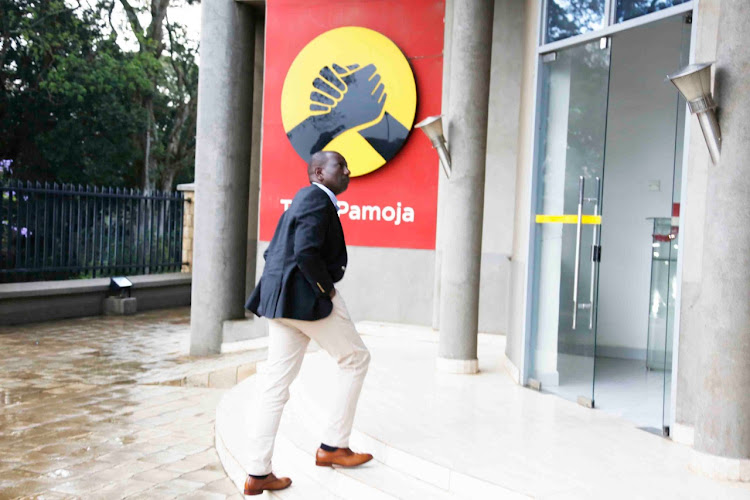 However, the DP cut a lonely figure as none of the party’s top brass was at hand to receive him. His visit sparked speculation the DP wanted to check the state of preparedness should the President heed Maraga's advisory, which could trigger countrywide parliamentary by-elections.

Ruto's deputy director of communications Emmanuel Talam dismissed the speculation saying he was there to check on the "progress of the party".

"He went there in his capacity as the deputy party leader. He has an office there," Talam told the Star on the phone.

The absence of all senior party officials was the clearest signal that Ruto remains an outsider in an outfit where he is deputy leader.

Jubilee secretary general Raphael Tuju told the Star the DP arrived at the headquarters after he had left but said he will enquire if the DP needed something that required his attention.

“I have just been made aware that he visited. I am going to find out if there was anything he wanted that requires my attention,” Tuju said.

Ruto's impromptu visit to the Thika Road-based office came weeks after he said the ruling party had been hijacked by cartels and busybodies.

During an interview on Citizen TV last month, Ruto, who has fallen out with President Kenyatta, admitted that Jubilee was "dysfunctional " and said "plans were underway " to salvage it ahead of the 2022 election.

Jubilee Party deputy secretary general Caleb Kositany said the DP was at the headquarters to establish the level of preparations for several by-elections.

"We have by-elections that are to be held anytime soon and as Jubilee, we must prepare for them," Kositany told the Star on the phone.

The Independent Electoral and Boundaries Commission (IEBC) is expected to conduct the polls once the Health ministry issues new protocols for Covid-19 during elections.

The IEBC in March postponed them after the government imposed restrictions on gatherings to curb the spread of the coronavirus. Covid-19 cases have drastically dropped to an average of 100 a day.

Kositany also said the presence of the DP at the offices of the squabble-ridden Jubilee Party "is the beginning of a journey to resolve the challenges facing it.

"You know we have had problems after the handshake, the National Executive Council has not met. We have pending party elections, which we hope to address soon," he said.