BATTLE FOR THE COAST

The visit comes barely a week after Raila's and about three weeks after Ruto's.

• Uhuru jetted into Mombasa on Saturday mid-morning and toured Liwatoni on Mombasa island where the government is constructing the Sh1.9 billion Likoni pedestrian floating bridge.

• He also toured the Liwatoni fishing complex, a facility that the government is upgrading into a full fishing port. 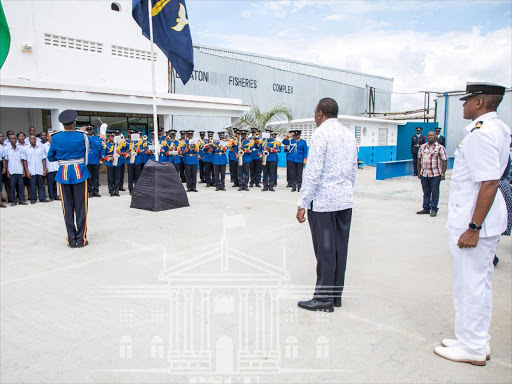 President Uhuru Kenyatta’s impromptu inspection of Coast infrastructural projects is part of a scheme to lock his deputy William Ruto from the region, political observers say.

Uhuru jetted into Mombasa on Saturday mid-morning and toured Liwatoni on Mombasa island where the government is constructing the Sh1.9 billion Likoni pedestrian floating bridge.

According to State House, the 1.2km bridge, the first of its kind in the region, is 51 per cent complete and will be ready for use by end of this year.

Uhuru also toured the Liwatoni fishing complex, a facility that the government is upgrading into a full fishing port.

The President rallied small scale traders at Liwatoni to take advantage of the bridge and fishing port projects to grow their businesses.

He then took a boat ride to the new Kipevu Oil Terminal (KOT) where he was received by Infrastructure CS James Macharia.

The Sh40 billion new KOT, which is currently under construction, is a 200,000 DWT capacity facility capable of handling import and export of all petroleum products.

On Sunday, he was expected to attend a church service in Malindi and then proceed to Lamu to inspect the works at the Lapsset project.

This visit, coming barely a week after his development and political partner ODM chief Raila Odinga toured the region, and about three weeks after Ruto’s visit is seen as an assurance to Coast residents.

Residents of the Coast region, traditionally a bastion of Raila, have been complaining of neglect from the national government, with policies that seem to take away the major resources like the Mombasa port right from under their noses.

Political commentator Mwakuja Mrombo said Uhuru’s visit is meant to reassure the residents that there are better things to come out of the blue economy and focus should be on that and not spilt milk.

“Ruto has been working tirelessly to try and wrest some control of the region from Raila’s grip. That is what the President and Raila are trying to prevent.

“Uhuru is anticipating Ruto will be using the complaints that Coast has been neglected and its resources taken away to try and gain some support in his 2022 bid. Uhuru wants to nip that in the bud as early as possible,” Mrombo said.

However, political analyst Hassan Mwakimako says Uhuru’s visit is not more than a president performing his mandate.

“I see a person who is trying to cement his legacy as he nears his exit from the throne. He has been avoiding political talk, and especially the BBI because those are distractions from his development projects and legacy,” the Pwani University humanities lecturer said.

The don said, on the contrary, the President has given a deaf ear to Coast residents' complaints about their region.

“What he is saying at best is that there is time for everything. Time for politics and time for development,” Mwakimako said.

He noted that Raila’s visit was a campaign for the BBI, while Uhuru’s is to ensure ‘national projects’ based at the Coast are on course.

“Resources at the Coast are considered national. That is what irks Coast residents and the President has come to inspect them without telling them otherwise,” Mwakimako said.

However, Rabai political commentator Philip Mbaji said Uhuru’s visit comes from the same script as that of Raila. He said it is all about the BBI.

“In Taita, Raila said reggae will be back within a month and within that same period Uhuru shows up at the Coast. They are preparing the Coast people for the BBI campaign,” Mbaji said.

“The visit is symbolic. Uhuru does not have to talk about it.”

He agreed with Mrombo’s view that the two are working to try and block Ruto from gaining any foothold in the region.

Ruto is expected to visit Chonyi this week in what will be the third visit of the region within six weeks.

The DP sees the Coast as region he can turn some of Raila’s staunchest supporters towards his side.

Mrombo said the Blue economy, if well harnessed, has the potential to control the country’s economy.

“The President through Gen Samson Mwathethe, wants to revitalise the blue economy. In the end, it is Mwathethe who will be given the position. That is where money is,” Mrombo said.

He said for long, Coast has never seen economical riches of the sea.

“The Indian Ocean has trillions of shillings in wealth. Control the Blue economy and you control the political heat from the region,” he noted.

Umoja Summit Party of Kenya secretary general Naomi Cidi said the region is still bitter with the national government for oppressing them.

“The visit does not mean anything for us. If he wanted to tell us something he would have called us, leaders, to speak with him. He has not done that. So, it is his private thing,” Cidi said.

“I don’t see it as of any benefit to us. We are not children anymore.”