• The Friday meeting was to help leaders heal from divisions argued to have defeated the region's unity of purpose.

• The Star is reliably informed that attendees reiterated their concerns that the region must not fall to grass after President Kenyatta exits office in 2022. 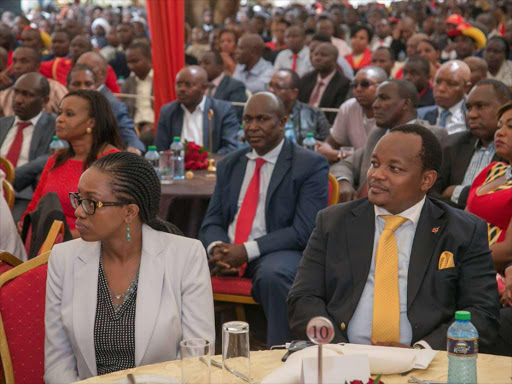 Mount Kenya leaders may have conceded that the region doesn’t stand a chance to front a presidential candidate in the 2022 general election, but they are not ready for a weak structure of government.

The region is thus bidding for a powerful deputy president or powerful prime minister should the President Uhuru Kenyatta and ODM leader Raila Odinga-led Building Bridges Initiative yield the seat.

Multiple sources told the Star that this was among the issues that informed the latest bid to unite leaders from the region to speak in one voice.

The contentious revenue sharing formula, which Kiharu MP Ndindi Nyoro and other lawmakers have said is a loss to Mt Kenya, has sparked a sense of urgency too.

Several lawmakers have denied claims the succession debate featured in the meeting held on Friday at Thika Greens.

But the Star is reliably informed that attendees reiterated their concerns that the region must not fall to grass after President Kenyatta exits office in 2022.

“We are working on a situation where even if we get the DP post, it is one that is spiced up and with an icing on the cake,” a lawmaker who asked not be named said on Sunday.

Among other considerations is to have the region man the legislature - either of the two Parliament speakers, more so National Assembly; and also control lucrative ministerial posts.

“The main drive is to ensure that the region is in government since it is the biggest voting bloc in the country,” the MP said.

In this regard, Mt Kenya is now positioning itself as "an attractive bride whom politicians seeking support from must seduce".

In the last election, the region voted the duo of President Kenyatta and Deputy President William Ruto to the last man.

It was expected that President Kenyatta would serve 10 years then pass the mantle to the DP, but that appears to be no more.

On Saturday, Laikipia Woman Representative Catherine Waruguru said the region's support to the top contenders – Ruto, Musalia Mudavadi and Raila, will now be based on their manifesto.

Waruguru said they will also not allow leaders to impose candidates for governor, senator, woman representative, MP and MCA posts on residents.

“Any person who thinks they have absolute support of the mountain should be very worried. We have one enemy who thinks he can come and plan for us who holds which seat as if we don’t know how to plan our things,” she said.

Waruguru, in her blunt remarks, said the person with the best deal will be supported.

She also cited the revenue sharing formula debate as having "opened their eyes to see friends and enemies".

“There are people who did not want us (Mt Kenya) to get more money but every Sunday they come with Sh2 million to a church to be shared by over 100,000 constituents,” the MP said.

But over 50 MPs from Kieleweke, Tangatanga, and the neutral ones said they may not be keen on politics as of now but the bigger picture - to spur development.

There are grumbles President Kenyatta’s administration is yet to sufficiently tackle poverty; agriculture; roads – and time is running out.

Ndaragwa MP Jeremiah Kioni said they would not want development projects that are driven by harambees.

“Those who are focused on 2022 are the ones responsible for the lack of focus on issues affecting the people there. They like harambees, which are not our focus. We cannot improve infrastructure through harambees.”

Kioni said their focus is on the unity of the country, development in the region, improving road infrastructure, classification roads, water and dealing with corruption.

“We don’t want to be hoodwinked with small harambees here and there. If you are doing harambees for private institutions, it is like taking money to an individual,” Kioni said.

The region's leaders hold that at the rate at which the country is growing, they’d prefer financing-driven by institutions such as banks and Saccos.

Gatanga MP Joseph Nduati said the leaders agreed that it was too early to discuss succession "as it is still a difficult subject".

“We agreed we will continue working together to deliver to our people since most of us were elected on one ticket under the leadership of President Uhuru Kenyatta,” the MP said.

Nyeri Town MP Ngunjiri Wambugu said they all agreed on the need to unite the leaders for the development of areas common to the people in the Mt Kenya region.