Says Uhuru is a believer in principles of democracy and wouldn't condone such misinformation.

• DP William Ruto said the country would no longer be held hostage by leaders who thrive on retrogressive politics.

• Ruto asked Kenyans to stand up against those using blackmail and intimidation to influence their political stand.

The DP said that Uhuru is a firm believer in the principles of democracy and would not condone such misinformation was causing unnecessary confusion among Kenyans.

“I do not think President Kenyatta has told anyone that he wants his term extended. So, where are these people getting all this information?" Ruto said.

Ruto made his remarks on Monday at his Karen home during a meeting with leaders from the Luo and Luhya communities.

He also called for transparency and inclusivity in talks about Constitutional amendments adding that leaders spearheading the exercise should not force or threaten Kenyans to support the proposals therein.

“As we discuss the Constitution, let us treat all Kenyans equally. Let us not have cards under the table.”

The DP asked Kenyans to stand up against those using blackmail and intimidation to influence their political stand.

He said the country would no longer be held hostage by leaders who thrive on retrogressive politics. 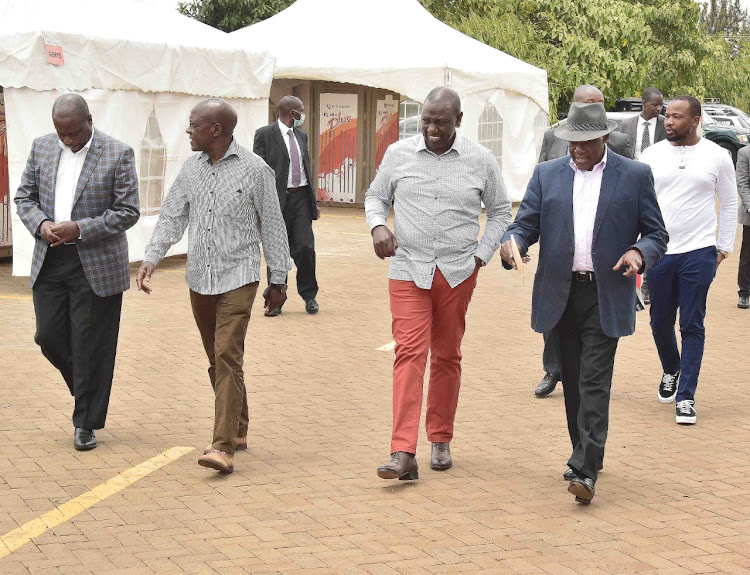 Deputy President William Ruto made at his Karen home during a meeting with leaders from the Luo and Luhya communities on September 14, 2020.
Image: DPPS

Gachagua said they will support the Building Bridges Initiative (BBI) only if the needs of ordinary citizens are prioritised.

"We are not mad people to oppose the BBI proposals if it is about the unity and the empowerment of the people,” Gachagua said.

His sentiments were echoed by Khalwale who said: "we will support BBI at the right time, that is when we have seen its content.”

During the event, former ANC official Eliud Owalo declared that he is now in Ruto's camp ahead of the 2022 elections.

Owalo resigned as a member of the Musalia Mudavadi's ANC party in August saying that he felt it was "imperative to create ample space within the Party".

Uhuru: I'm not interested in another term or being Prime Minister

Says he has no clue whether there is going to be a premiership.
News
9 months ago
by KEVIN CHERUIYOT Online Journalist
News
14 September 2020 - 15:43