•Trans fat is formed through an industrial process that adds hydrogen to vegetable oil which causes the oil to become solid at room temperature.

•From the report, Kenya is among 14 African countries that have adopted national plans on nutrition or Non-communicable diseases. 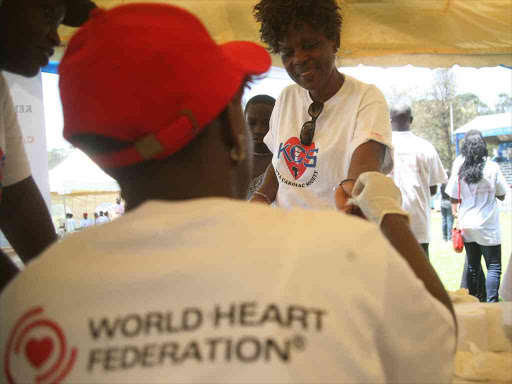 A woman undergoes an examination at Railways Club during a function to mark World Heart Day, September 29, 2013.
Image: FILE

Your favourite snack or plate of food may slowly be leading you to an early grave, a WHO report shows.

The latest report shows that at least 1.5 per cent of coronary heart disease deaths in Kenya are due to consumption of foods high in trans fatty acids.

The report, ‘Countdown to 2023: WHO Report on Global Trans Fat Elimination 2020’ was released by the World Health Organisation on Tuesday.

This is the highest rate compared to the Kenya's neighbours.

Eygpt and the US are the leading with 8.39 and 7.57 per cent respectively.

Intake of trans-fatty acids is associated with increased risk of heart attacks and death from coronary heart disease.

Trans fat is formed through an industrial process that adds hydrogen to vegetable oil which causes the oil to become solid at room temperature.

This partially hydrogenated oil is less likely to spoil, so foods made with it have a longer shelf life.

Some restaurants use partially hydrogenated vegetable oil in their deep fryers, because it doesn’t have to be changed as often as is the case with other oils.

They may be found in a variety of food products, such as baked goods like cookies and cakes, fried food like French fries and fried chicken, margarine, popcorn and frozen pizza.

From the report, Kenya is among 14 African countries that have adopted national plans on nutrition or Non-communicable diseases.

This means there are national policies, strategies or action plans that express a commitment to reduce industrially produced TFA in the food supply.

South Africa has been lauded as having the best-practice mandatory TFA limits in foods, oils and fats since 2011.

NCDs including heart disease, stroke, cancer and diabetes are responsible for 41 million deaths worldwide every year.

Cardiovascular disease is the main killer, accounting for nearly half of all NCD deaths, causing an estimated 17.9 million deaths every year.

“Many of these deaths are in people under 70 years of age, and most occur in low- and middle-income countries,” the WHO DG Dr Tedros Ghebreyesus said.

“The WHO is committed to supporting countries to achieve the Sustainable Development Goal objective of reducing premature deaths from NCDs by one third by 2030.”

According to the report, dietary risks were responsible for 10 million deaths from cardiovascular disease among adults, based on the most recent global systematic evaluation of diet-related disease burden.

The global health agency in now calling on food and beverage industry groups to implement the commitments they have made to eliminate industrially produced TFA from product lines.

“Among various measures to tackle dietary risks, elimination of industrially produced TFA is a relatively straightforward, low-cost, one-time policy measure that is within reach and has significant long-term health benefits.”

The report lauds the International Institute for Legislative Affairs, a civil society group in for having projects to assess the amount of TFA in the national food supplies, so as to promote best-practice policies, and replacement with healthier oils and fats.

“Many countries have sizeable informal food sectors that are largely unregulated and for which there may be no existing enforcement infrastructure to build on,” the report states.

In the coming year, WHO recommends that countries focus on investing in monitoring mechanisms, such as laboratory capacity to measure TFA content in foods.