Raila condems 'drums of war' which he said are being beaten by reckless politicians. 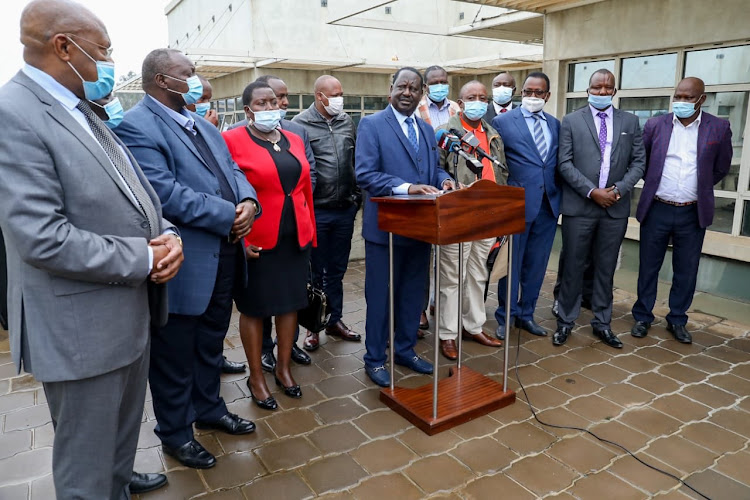 Allies of DP William Ruto have gone personal with President Uhuru Kenyatta and his family with Opposition chief Raila Odinga warning of a “plot” by some politicians to take Kenya to war.

On Tuesday, Raila led top political leaders, including ANC boss Musalia Mudavadi and Wiper’s Kalonzo Musyoka, in condemning 'drums of war' which they said are being beaten by reckless politicians.

“We have gone to war in 1992, 1997 and 2007 and nobody should try to take this country to war again because of politics,” Raila said at a press conference at his Capitol Hill office.

He went on: “We believe that this country deserves peace and unity now more than ever, war cries and beating drums of war will not work.”

While Raila did not directly mention Ruto, his key ally who spoke after him was blunt.

“Deputy President Ruto must stop threatening people with violence. He should not think he has the monopoly over violence,” said Suna East MP Junet Mohamed, a Raila confidant.

In a telling statement of an all-out war in Jubilee, Uhuru’s cousin Beth Mugo linked Ruto to the attacks, saying as the duo’s political captain, he has failed to come out to condemn his lieutenants.

“The fact that their political captain, the Deputy President, has not come out to condemn his troops is very telling. Does it mean that the DP supports the public statements by these two leaders?" Mugo, a nominated Jubilee senator, posed.

Ruto on Monday night condemned attacks by Sudi and Ng'eno on the first family.

Yesterday, Mugo described Mama Ngina as an elderly grand lady who is the true mother of the nation.

“She has held herself with a lot of dignity away from politics all her life…for this reason, to associate her name with corruption, dirty and irresponsible succession politics is the highest degree of provocation,” she stated. 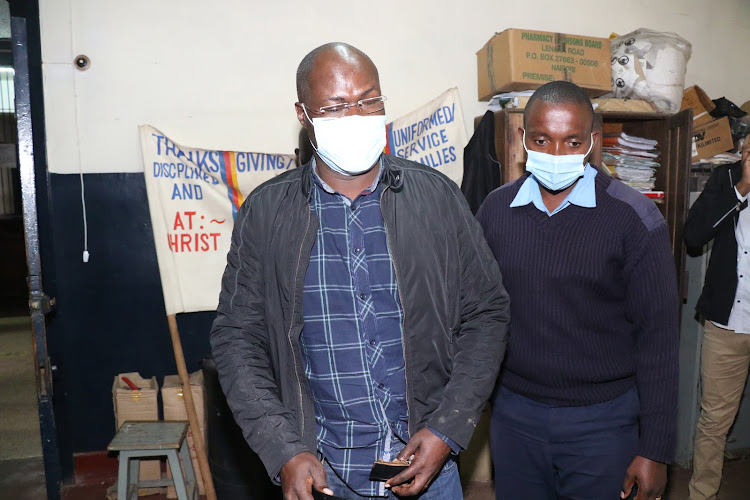 Ruto’s men have in recent weeks taken off their gloves and trained their guns on the President, saying he was the man behind Ruto’s woes.

On Sunday, during a live broadcast interview with Weru TV, Ruto made some remarks that sparked outrage in the ruling party.

When asked by the interviewer what he would do to get secretary general Raphael Tuju and vice-chairman David Murathe out of the helm of Jubilee, Ruto retorted: “If it becomes difficult, we shall pray to God to get them out.”

He went on, “God will just get them out of the party because they are the biggest threat to the unity of our nation, those characters [Tuju and Murathe], and to having the politics based on ideology, on policy and programmes rather than politics that is retrogressive.”

Ng'eno was arrested on Monday and arraigned in a Nakuru on Tuesday over claims of incitement.

Sources told the Star that Kanu had moved to expel him from the Independence party in what will now be a political nightmare for the two-term legislator as he faces the risk of losing his seat.

Junet termed as “dishonest” Ruto's statement cautioning his allies against attacking the President.

Taking to Twitter on Monday shortly after the arrest of Ng’eno, Ruto said the use of “unsavoury words against mothers and the Head of State was a no, no".

“Leaders should exercise restraint and avoid insults and bad language against other Kenyans. Unsavoury words against mothers and Head of State is a NO, NO. No amount of anger justifies use of offensive insulting language,” Ruto said.

A section of members of the National Assembly Security Committee on Tuesday asked Ruto to own up to his allies and personally apologise to the President over the attacks.

The committee chaired by Kiambaa MP Paul Koinange said that while Ruto has condemned the attacks by Sudi and Ng'eno, the same was not enough as they are “mere mouthpieces.”

"DP Ruto should apologise to the President, his family and the entire nation in person and not through Twitter,” Koinange said at a press conference at Parliament Buildings.

Politicians have claimed that Ruto's allies are getting personal in their attacks on the President and his family threatening the country's stability.

The verbal assault by the DP's allies comes just days after they warned Uhuru that it would get “messy and nasty” once they take off their gloves to defend their captain.

He said the country was in a heated “political crucible” but cautioned politicians not to take that as an excuse to “exceed the boundaries of decency in their attempt to score points against perceived political opponents - real or imagined.”

“I, therefore, urge for restraint and temperance in our political discourse. Our politics must not be allowed to degenerate into an abyss of cacophonous barbarism. Let us learn to reason together as Kenyans,” Kalonzo said.

"Politics of hatred and insults is the last thing Kenyans want. We all know the consequences of irresponsible remarks from leaders. It is so unfortunate that we are degenerating to levels where pressing issues like unemployment and poverty are not being addressed," Mudavadi said.

Law Society of Kenya President Nelson Havi warned that President Kenyatta and his deputy were now devouring themselves after “betraying the trust of Kenyans for eight years.”

“They have abused state power for eight years. They are now abusing themselves through their men and women in a self-annihilation apocalyptic exercise. It is not for the country,” Havi tweeted.

Ng’eno and Sudi’s attacks appear to be the last straw that could lead to a messy divorce in Jubilee.

The duo verbally attacked the President and told him off against what they termed as a scheme to humiliate and isolate the DP in the management of government affairs.

They claimed that Kenyatta was managing the country as a personal property without regard to the 47 million Kenyans whom they said hold the biggest stake.

In a rare move that has sparked public uproar, Sudi hurled insults at Uhuru and dragged in the head of state's mother, Mama Ngina, saying the President cannot rule Kenya with an iron fist.

Sudi warned that the DP Ruto's allies were not pleased with the manner in which the former Eldoret North MP had been made a “squatter” in the government he tirelessly helped form.

“You have a lot of disrespect to William Ruto, you have tortured a man who worked day and night to consolidate the country as he campaigned for you (Uhuru). He (Ruto) is a squatter in his government and it has now reached a point where you want to vanquish all of us,” Sudi said.

Ng'eno had warned Uhuru against sidelining Ruto in the management of the affairs of government.

“You must work with the DP, if not, dissolve the government we go for election. Kenya is not Uhuru Kenyatta's land. Rule this country under the Constitution and if not resign and go to Gatundu,” Ng'eno said.

Sudi said DP Ruto has been sidelined from the government since Handshake took over.
News
1 year ago

Resign or get expelled, Kanu tells MP Ng'eno over slur

Salat said Kanu has parted ways with Johanna Ng'eno and apologised over his remarks.
News
1 year ago