Sudi said DP Ruto has been sidelined from the government since Handshake took over.

• Ng'eno had hit out at President Uhuru Kenyatta for the wrangles in Jubilee Party. He told the President to work with DP William Ruto "or go home".

• Oscar Sudi said the president has sidelined his deputy even after helping him in two general elections to win the top seat. 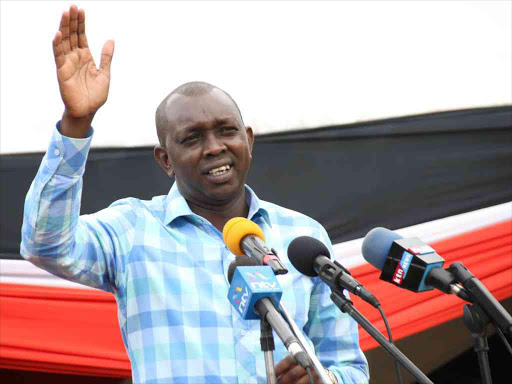 Kapseret MP Oscar Sudi during a past function. /FILE

Police officers in Transmara East arrested Ng'eno over incitement which he made over the weekend regarding President Uhuru Kenyatta and his family.

Ng'eno had hit out at President Uhuru Kenyatta for the wrangles in Jubilee Party. He told the President to work with DP William Ruto "or go home".

"You are not Kenya and Kenya is nor Kenyatta's or Mama Ngina's land. This land belongs to 47 million Kenyans, you cannot run it as you wish," the legislator said.

"If you want to lock us up or shoot us, go ahead. Your father shot many people but the country is still running."

Agreeing with Ng’eno, Sudi said that it is true that the president has sidelined his deputy even after helping him to win the top seat twice.

“I want to tell the president that we do not owe you anything. We voted for you three times, in 2013 and twice n 2017… this country belongs to all Kenyans,” irritated Sudi said.

He added that “You have betrayed and treated William Ruto as somebody who does not deserve anything. He appears cornered as you decide every move.”

Sudi said the president should not interfere with Ruto’s functions in the government even after ushering in ODM leader Raila Odinga through Handshake.

He has dared the National Police team to arrest him after making his remarks.

Ng'eno warned Uhuru to run the state constitutionally or go to Gatundu (home), adding that the President should not dictate who will succeed him, "and cannot threaten us".

"Moi and Kibaki finished their terms and left, you should do the same next year when the time comes." the MP added.

Police say his remarks on Sunday at Murkan were meant to incite communities.
News
2 years ago
Post a comment
WATCH: The latest videos from the Star
by KEVIN CHERUIYOT Online Journalist
News
07 September 2020 - 20:56
Read The E-Paper