• Deputy President William Ruto has for the first time said graft was rife in the ruling Jubilee goveernment since 2013.

• The DP has been challenged to reveal the overnight billionaires created by Jubilee since 2013 when he took office. 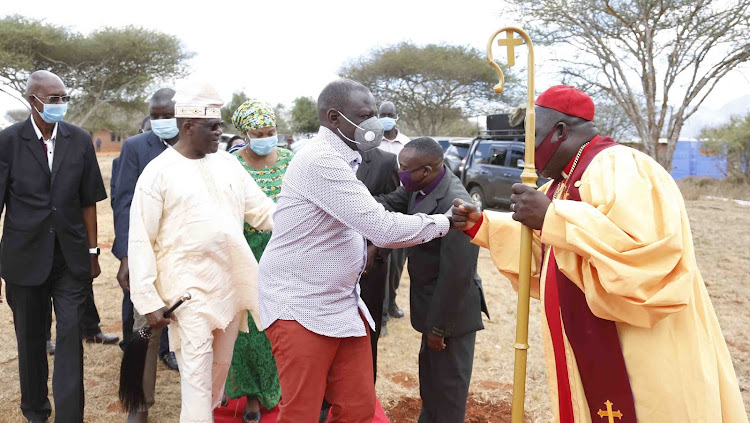 Deputy President William Ruto has for the first time declared that graft has been rife in the ruling Jubilee government since 2013, producing overnight billionaires.

The DP said the Covid-19 saga at the Kenya Medical Supplies Authority is just one of many corruption scandals that have served a few individuals with a big spoon.

The country's second in command turned the tables against his critics and said he regretted that all along, while plunder was underway for seven years, he had been set up as a scapegoat.

Ruto said that some individuals who were broke in 2013 have made a killing from graft schemes.

"The corruption 'consultants', brokers and conmen, some bankrupt in 2013, are now billionaires after looting while scapegoating WsR. Their overgrown impunity is shamelessly making them steal even from the sick in a pandemic. The end is nigh. Nowhere to hide. No more scapegoating," Ruto tweeted.

His tweet followed claims by Jubilee vice chairman David Murathe who linked Ruto to Kilig Limited, one of the firms that tendered for goods at Kemsa.

During an interview with Citizen TV on Tuesday night, Murathe claimed that while Kilig director Willbroad Gachoka was his friend and business partner, there was an attempt to transfer the ownership to “known associates” of the Deputy  President.

The firm was awarded a Sh4 billion tender to supply personal protective equipment (PPE) by Kemsa.

“William Gachoka and his partner (Zhu Jinping) had transferred the shareholding of that company to known partners of Ruto and when they could not come through with the financing for the importation of the equipment it reverted to the original partners through the lawyers.

“We have the evidence. We have the transfers. If you want to find out go to KCB and find out who are the account holders of Kilig Limited. You will find out they are known partners of the Deputy President, William Ruto," Murathe said.

Ruto fired back, claiming that the end was coming for individuals he said were penniless when Jubilee took power in 2013 but have since  been transformed into billionaires through the theft of public funds.

The DP's no-holds-barred response gave the clearest signal the Jubilee ship could be sinking and that he was getting ready to spill the beans on government after years of being defensive.

For the last seven years, Jubilee has been battling a groundswell of graft scandals, including the Sh1.9 billion National Youth Service heist that almost bought down the government in 2015.

Other sagas during Jubilee's reign include the controversial Sh215 billion Eurobond in 2014, the Sh5.2 billion Afya House scandal in 2016 and the Sh63 billion Arror and Kimwerer dams heist in 2019.

Despite pressure from the opposition and civil society, the Deputy President then defended the government, often accusing critics of a being on a political witch-hunt.

“Let us be truthful and use facts instead of inflating and cooking figures in scandals probes. The alleged loss of Sh21 billion in the Kimwarer and Arror dams establishment is a flat lie. The money in question is in fact Sh7 billion," Ruto said last year.

However, the DP is now accusing unnamed individuals of profiteering, using well-choreographed theft of public funds, including those set aside to save lives in the Covid-19 pandemic.

The DP's latest outburst over graft has further exposed the tension growing within government. There appears to be concerns whether the wobbling Jubilee administration can hold together until 2022.

On Wednesday, ODM chairman John Mbadi termed Ruto's claims an admission that he, too, has benefited from the Jubilee scandals since he assumed office in 2013.

“If there is any billionaire created by Jubilee since 2013, then it is the Deputy President. Ruto is one of the overnight billionaires in the country,” he said.

The National Assembly Minority leader said it was ridiculous that Ruto has been defending graft suspects in government for many years, even when ODM pushed for their prosecution.

“If Ruto wants us to take him seriously, then let him tell us the billionaires Jubilee has created since 2013. Ruto has been an impediment in the fight against corruption since 2013,” the Suba South MP said.

Governance expert Javas Bigambo urged the DP to publicly tell Kenyans if he is acting in anger just because the so-called billionaires are not on his side.

“To what extent has Jubilee, by commission or omission, enabled those individuals to become billionaires? Where has he been during this process of transformation of these individuals? Why was he quiet during that time?” Bigambo asked.

The Jubilee situation room is likely to get messy in coming weeks when investigating agencies close in on graft lords said to have connived to drain Kemsa.

On April 19, Kemsa issued a commitment letter to Kilig Limited to supply the drugs and supplies agency with 450,000 PPE.

This was to include N95 masks, bodysuits, goggles, water-resistant shoe covers and gloves.

Jubilee has been hijacked by busybodies like Murathe - Ruto

"The party has been hijacked by busybodies and conmen and brokers like Murathe" - DP.
News
1 year ago

Murathe lashes out at Ruto for criticising BBI report before unveiling

Murathe said nobody is privy to the contents of the BBI's final report.
News
1 year ago

Murathe did not call Ruto, pledge support in 2022

This was part of The Star's April Fools' Day
News
3 years ago
by JAMES MBAKA Deputy Political Editor
News
03 September 2020 - 06:45