Being piloted in 12 counties before rollout.

• The sum to be used to supply farm inputs such as seeds, crop protection, fertiliser, equipment and later insurance through e-vouchers 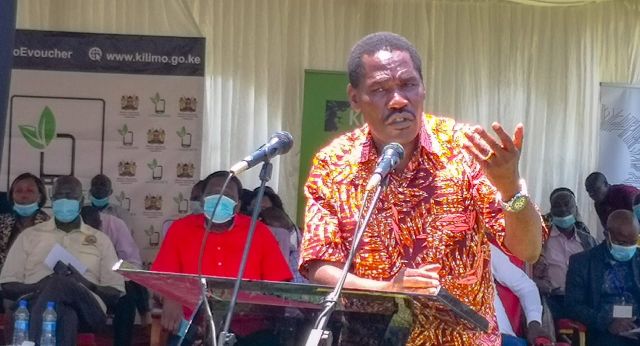 Munya said the government has set aside Sh1.5 billion for the supply of farm inputs, including seeds, crop protection, fertiliser, equipment and later insurance, through e-vouchers, targeting 200,000 small-scale farmers from 12 counties.

He spoke on Friday during the launch of the e-voucher app at Ahero Multipurpose Centre in Kisumu county.

“These interventions are geared towards supporting the sustenance of our farming communities and provide continued gainful employment for thousands of stakeholders in our breadbasket areas,” the CS said.

The government will support beneficiaries with 40 per cent cost of the inputs package, while the beneficiary will pay 60 per cent. This also ensures that recipients use the provisions responsibly and only towards productive farming. In addition, the system will be enforced through a network of localised agro-dealers and relevant value chain actors. Thus, the beneficiary producers will have access to these inputs almost at their doorsteps.

“Today the e-voucher program’s primary target value chains are maize, rice, Irish potatoes and coffee. These commodities have been identified as priority food security commodities under the Big 4 Agenda, as well as the ASTGS (Agricultural Sector Transformation and Growth Strategy).

"We are piloting in 12 counties and 24 wards, the selection of which was agreed on in conjunction with the Council of Governors with initial 200,000 smallholders to be reached.

"In subsequent rollouts, the government will target an increased variety of value chains, including livestock and fisheries needs, and the number of producers reached scaled up in those phases,” Munya said.

The CS said evidence shows that the production of major food commodities has been stagnating or declining against a backdrop of a rapidly increasing population with increasing purchasing power. The result is a widening of the food supply and demand gap, leading to increased food imports, higher food prices and general price volatility.

“To address the challenge of low yields, the government has been implementing a fertiliser subsidy for the past 12 years. This model has faced some pertinent challenges, including the high cost to government — approximately Sh5 billion per year — and has been characterised by inefficiencies in its delivery and management. Over the years, the impact has remained sub-optimal towards realising the food and nutrition needs of the country,” Munya said.

In addition, not all targeted farmers were effectively reached and even the few that were reached would often get the fertiliser out of season. Moreover, the subsidy programme has previously focused on fertiliser and not on other necessary inputs, thereby compromising the potential gains from a combination of inputs such as seeds, agrochemicals and other planting and stocking materials.

He said the e-voucher is the first step to rectifying the problem and shifting the nationwide impact support programme focus to electronically register 1.4 million needy farmers to access inputs such as seeds, crop protection, fertilizer, equipment and later insurance.