At least three groups emerge in battle to succeed Uhuru as Mt Kenya kingpin, with a shot at higher office 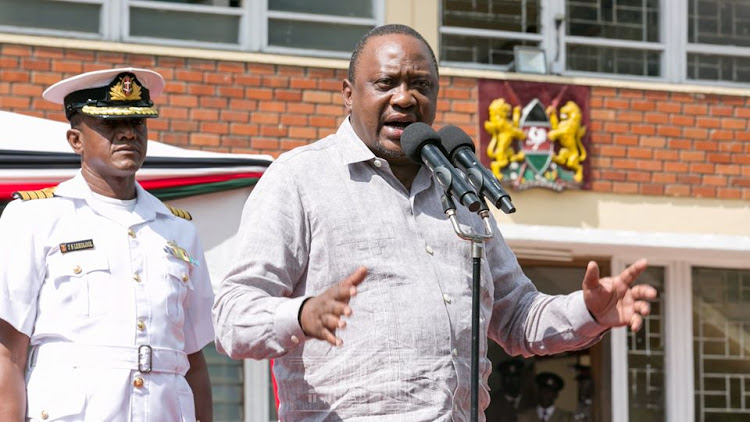 A fight has erupted in President Uhuru Kenyatta's Mt Kenya backyard among bigwigs positioning themselves to succeed him as the region's political kingpin after 2022.

At least three camps, which have emerged in the race to succeed Uhuru, have been holding separate night strategy meetings to map out their succession battle plans

Whoever controls or speaks for the vote-rich  region has a good shot at more power and high office, and take his or supporters along

The region's notables are squaring off to catch the President's attention and endorsement as his political heir.

The fight is playing out behind the scenes among influential players scheming to assume the mantle of leadership, two years before the end of Uhuru's term. The President is serving his second and final term as provided in the 2010 Constitution.

Former Agriculture CS Mwangi Kiunjuri, his successor Peter Munya and National Assembly Speaker Justin Muturi are all said to be fighting to control the region when Uhuru exits.

Governor Waiguru, for example,  says her impeachment by the assembly was engineered by those who don't want her to succeed the President.

She is among the key proponents of the BBI initiative in Central Kenya. The report proposes a change of the Executive, and she is among those mentioned as potential beneficiaries is the proposals pass.

Even as the political storm brews ahead of the 2022 General Election, the President has maintained a calculated silence about his preferred successor.

Uhuru has even publicly reprimanded the succession schemes, saying his focus is to deliver on his promises to Kenyans under his ambitious Big Four agenda.

On Thursday, former Kasarani MP John Njoroge confirmed that politicians are busy plotting to succeed the President within Central Kenya.

He told the Star that while the President will be completing his term in 2022, those scheming to succeed him are threatening the implementation of his agenda.

“What we should be seeing are leaders working to support the President to realise his agenda. Then, when the time comes, they will enter the ring," Njoroge said.

He went on, “People are holding meetings day and night and are, for example, not telling us how they want to help the President along the way as time is running out.”

The succession intrigues could threaten the  President's fight to seal an enduring legacy.

“It appears the focus among Uhuru's allies from his backyard has shifted to outdoing each other to show who is better placed to succeed him. All these manoeuvres are not working in the best interest of the President,” analyst Felix Odhiambo said.

The President may well need to caution those who are stirring up the succession battle to give him ample time to deliver his agenda, he said.

"The danger is that all the succession noise and maneuverers will hurt his focus,” he said.

The Star has established that at least three factions are fronting possible successors, though some of the President's allies downplay reports of succession wars.

Senate Majority Whip Irungu Kang'ata said all leaders in the region are committed to helping the President achieve his agenda.

"The focus of any leader from the region should be working to enable our President to deliver on his plans, this is not the right time for succession politics," he said.

There are reports the President could be quietly grooming Kenneth, a one-time presidential contender, to assume the mantle by positioning him for the Prime Minister's position.

The PM's post is contained in the BBI report in the proposed expanded Executive to unite the country.

The strategy meetings with the notables, who also support the Uhuru's handshake with his political soulmate and ODM leader Raila Odinga, are aimed at isolating other Mt Kenya player.

On Thursday, former Maragwa MP Elias Mbau, a key Kenneth backer, told the Star  Kenneth is the best bet to succeed the President.

“Kenneth will be the one to represent us at the negotiating table as with our over eight million votes behind him,” Mbau said.

However, Kenneth's success in the Mt Kenya region will depend on his packaging, as he is seen as a man who betrayed Uhuru in 2013 when he too ran for President.

Kenneth had also refused to dissolve his Kenya National Congress party to join Jubilee in the run0up to the 2017 polls.

However, a push to position him as Mt Kenya's next kingpin has disrupted the status quo as his bid is likely to eclipse other influential figures.

For instance, analysts point out, Waiguru's initial growing influence as a key player in the BBI juggernaut has increasingly declined as her administration battles graft investigations by the EACC .

She was impeached by the Kirinyaga county assembly, but the Senate did not uphold her removal because 'handshake forces' united to salvage her political career, as she's needed to push BBI.

When Ethics and Anti-Corruption Commission detectives raided her homes two weeks ago, Waiguru termed the move a "charade" aimed at hurting her chances in Mt Kenya succession.

“The inescapable conclusion is that this is not about investigating travel imprests but a wider scheme to shape the 2022 succession politics of Mt Kenya,” Waiguru said after the EACC raids.

Initially she had been seen as a seen as a frontrunner in the succession race, but the probe could make her rising star a falling star.

Even as Waiguru battles roadblocks in succession, a faction allied to Kagwe is also scheming.

The Health CS has built a massive public profile through his Covid-19 briefings and is said to be keen on building his Mt Kenya influence.

However, in an interview with the Star, Kagwe dismissed reports he is angling to become the next Mt Kenya kingpin.

Kagwe argued it is both impractical and unAfrican to even talk about inheriting the position of a leader who is still in office.

“Traditionally, within the African culture, you will not begin to inherit people [people's roles] while they are there. It just doesn’t work that way within our culture,” the former Nyeri senator said.

He added, “I don’t know who is saying that [that I want to be kingpin] because myself, I have not said it.”

“I want to state categorically that we as leaders are not divided. In fact, there is no succession talk because there is no vacuum at the moment. We are firmly behind our leader President Uhuru Kenyatta and you have seen the development he has initiated,” the Kieni MP said.