Ruto to dump 'hijacked' Jubilee Party ahead of 2022 polls

• Ruto says the party he helped form has now been hijacked by conmen who will send it to its political deathbed.

• DP says Uhuru chose to work with other people in his second term making the government inefficient. 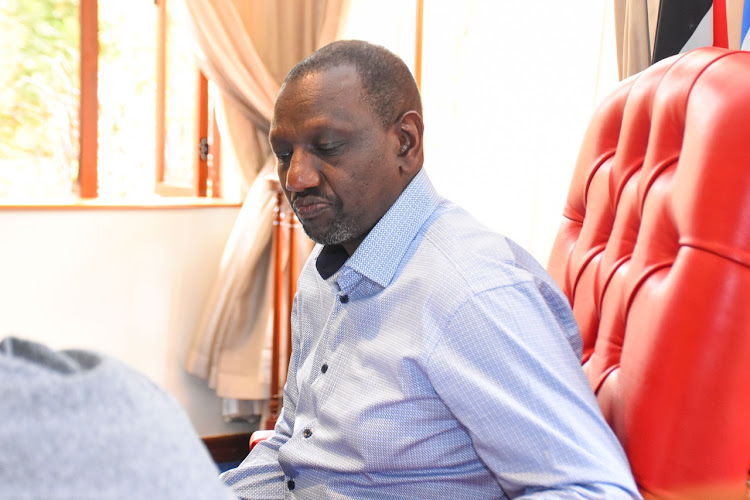 Deputy President William Ruto has given the clearest indication yet that he is done with the Jubilee Party and will be seeking a new outfit for 2022.

In an interview with the Star on Thursday, Ruto said he was working to solve the issues facing Jubilee but he was ready to consider other options.

"When the President disagreed with Kanu, he formed TNA and when I was done with ODM, I formed URP. In politics, there are always options and I will employ them at the right time," Ruto said by phone.

The Deputy President said he went out of his way to help President Uhuru Kenyatta form a national political party as a way to get rid of "ethnicity, marginalisation and [to] entrench gender balance".

"The party has been hijacked by brokers who are running it through fear. Their word is the party position. The same virus that infected KANU and killed it after the 2002 elections has come to Jubilee," Ruto said.

He added, "The mistake KANU made is that they found themselves with more people outside. [With] the kind of investment we have put in Jubilee, it will be tragic if we lose on the ideals. The biggest loser will be President Kenyatta and me."

This is the first time Ruto has boldly spoken about the troubles in Jubilee after his political union with Uhuru fell apart.

Ruto has been sidelined in Jubilee with some of his key allies, including former Majority leaders Aden Duale and Kipchumba Murkomen, being kicked out of parliamentary leadership positions.

During the interview, Ruto also said that while Uhuru has a solid legacy, his handshake with Opposition leader Raila Odinga has brought in "some new dynamics and disruptions".

"We have not been efficient as we were in the first term," Ruto said.

The DP seemed to confirm he had been sidelined by Uhuru, saying the difference in government performance during the two terms is clear.

The DP said he was concerned about the Building Bridges Initiative and the push to change the Constitution.

"This Constitution change push is from the leaders, not from the people. The people are more concerned about their daily living. Jubilee had no policy position. Maybe when the BBI document is released we may tell the people that this is also a priority," Ruto said.

The DP added that those participating in elections must be democrats who do not cause conflict by not accepting the outcome of elections.

"We must not demonise the position of opposition. Assuming you create five positions for five big tribes, aren’t we marginalising the other 33 tribes? The medicine is to nationalise political parties and take the same to the government. My legacy cannot be about changing the Constitution," Ruto said.

His comments came just a day after Uhuru said there was a need to change the Constitution to ensure that it meets the growing aspirations for Kenyans.

"Instead of a cease-fire document that enforces a zero-sum game in which the winner takes it all, the moment calls us to create a constitutional order that will long endure.  And on this, I want to emphasise that we must not go for the populist path. Let us choose the bold path, that path that will assure Kenyans of sustained peace and security, and shared economic prosperity," the President said on Wednesday.

On corruption, Ruto insisted the allegations involving Kemsa have been prosecuted in the wrong forums.

"Corruption is a matter we and Uhuru wanted to be handled differently. We wanted to make independent institutions work. Criminal prosecution cannot be done in the media," the DP said.

He added that the opposition have made a complete 180-degree turn instead of allowing institutions to work.

On claims he is the one who had changed his position, Ruto said he has only been against the Directorate of Criminal Investigations going to the media first with allegations.

"The DPP, the courts, the EACC don’t work under instructions. I was against the DCI sensationalising their investigations. EACC should be given a free hand to do their job. But the general view is investigations should be expedited," Ruto said.

On the issue of the 'deep state', Ruto said that it should be directed to those who always believe that the elections must be stolen.

Governor says the President revealed he will not keep his promise because the DP has been fighting him.
News
1 year ago

Ruto says governors, MPs and MCAs are being treated to intimidation and threats.
News
1 year ago

Why Ruto will not quit Uhuru's Jubilee yet