No joyriders flew to Rio at athletes' expense, court told

• He said payments made by the NOCK to eight athletes who did not participate in the 2016 games in Rio Brazil were legitimate and valid.

• He said payments made by the committee to eight athletes who did not participate in the 2016 games in Brazil were legitimate and valid. 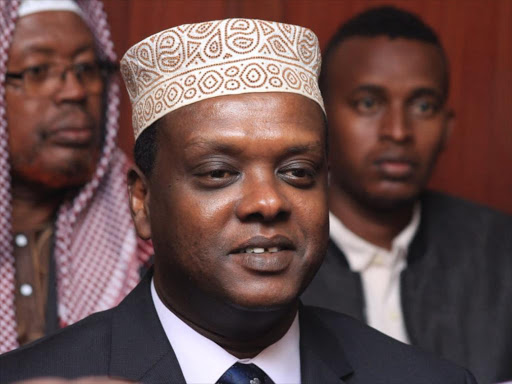 Former sports CS Hassan Wario has pleaded not guilty to the loss of Sh55m in 2016 Rio Olympics scandal./EZEKIEL AMINGA

An Anti-Corruption Court in Nairobi on Wednesday heard that no joyriders flew to Rio at the expense of athletes as claimed by investigators in the Sh55 million scandal that rocked Kenya in Brazil.

Stephen Arap Soi, the team leader in the Rio Olympics, told chief magistrate Elizabeth Juma that the people described by the DPP as joyriders include four athletes and the National Olympic Committee of Kenya lawyer James Gitau Singh.

He said payments made by the committee to eight athletes who did not participate in the 2016 games in Brazil were legitimate and valid.

Soi was testifying in a case where former Sports CS Hassan Wario and four others are charged with Sh55million graft.

Soi is accused of abuse of office by adding names in the list of Team Kenya and improperly conferring benefits to lawyer Singh and Kiprono Kosgey, Nicholas Koech, Hillary Kemboi and Thomas Longosiwa.

While denying authorising payment of allowances to eight athletes who never traveled for the games, Soi said the disbursement was not irregular.

He said the eight sportsmen and women failed to travel because some got disqualified by the International Olympics Committee during the Delegated Registration Meeting on July 21, 2016, while others were alternate athletes.

The athletes had been declared as members of Team Kenya, hence were entitled to receive the allowances and their air tickets getting booked. Four of them were disqualified at the final stages of the preparations while the alternate players failed to participate as there emerged no cause for their recall from Nairobi.

He also denied accusations of adding new people into the NOCK steering committee and failing to involve various sports federations during preparations of the games.

He explained that the federations were well represented as he produced minutes of the steering committee’s minutes as part of his defence evidence.

The court also heard that NOCK financial expenditures were under the watch of two Treasury officers –Francis Anyona and Peter Muya- who were monitoring the funds provided for the sports.