WHAT DOES IT DO

• The lawmakers concerned that taxpayers risk losing money in the project they claimed is shrouded in mystery.

• They lamented the lack of clarity in the recruitment of the youths, daily payment rates, and unclear accountability of the money. 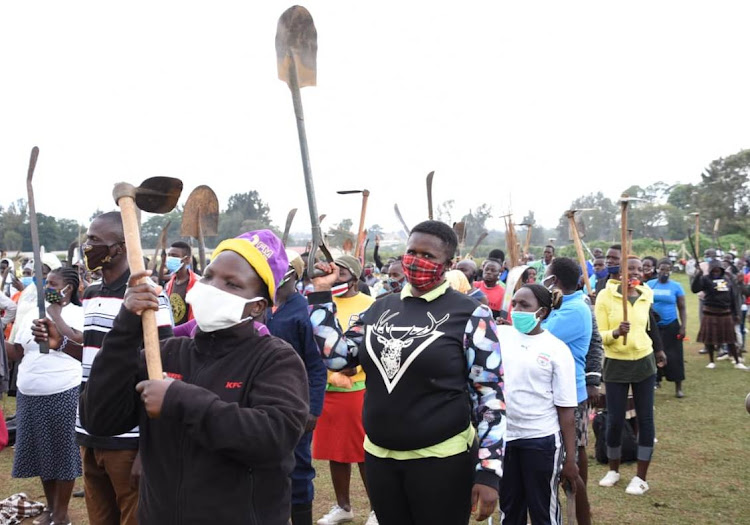 KAZI MTAANI: Some of the youths recruited for the Kazi Mtaani initiative in Eldoret during the launch of the programme at Kamkunji on July 13.
Image: MATHEWS NDANYI

Members of Parliament on Wednesday turned the heat on the National Treasury over the management of Kazi Mtaani programme.

The lawmakers derided President Uhuru Kenyatta’s administration for rushing the implementation of the initiative.

The President unveiled the Sh10 billion package for hiring youths to improve the hygiene of slums in major towns.

It was part of the Sh53.7 billion economic stimulus package to cushion the education, tourism and trade sectors.

The Kazi Mtaani was rolled out in Nairobi, Mombasa and Kisumu before it was expanded to Eldoret and Nakuru.

But MPs at the Third Leadership Summit in Nairobi raised concern that taxpayers risk losing money in the project they complained is shrouded in mystery.

“I am convinced that the ‘Kazi Mtaani’ programme was either introduced in a hurry or meant to siphon monies by some people,” Mwathi said.

He regretted that it has failed to enroll the most vulnerable youth in society as envisaged.

The lawmakers lamented the lack of clarity in the recruitment of the youths, the daily payment rates, and unclear accountability for the monies.

Budget committee chairman Kanini Kega (Kieni) cited the case of a lawmaker who confided in him about receiving cash meant for the elderly.

“This tells us that there is a need to monitor these disbursements to ensure they are going to the right people,” Kega said, blaming committee chairpersons for failing to question how money is used.

Deputy Speaker Moses Cheboi said: “Let’s ask ourselves: Is there more value in asking them to clean the drainage systems, or for instance in making desks or classrooms in schools now that we require to revamp schools in the wake of Covid-19 pandemic?”

Nyeri's Ngunjiri Wambugu said: “We have seen stimulus packages set aside for several sectors. What plans does the ministry have for non-teaching staff in schools or even to private school owners?”

Yatani admitted that there were lapses at the commencement of the programme but they have since been looked into.

“We have put systems in place to create several layers of oversight including who is going to be employed. The initial phase was funded by last year’s budget. We intend to implement it at every constituency headquarter going forward,” the CS explained.

He disclosed that more interventions would follow as outlined in the post-Covid-19 recovery strategy to be released soon.

He further assured Kenyans that all the money disbursed by the National Treasury has an audit component tied to it.

The CS said the health sector received only Sh21 billion of the over Sh200 billion from lenders.

He downplayed fears that the economy has taken a hit since the coronavirus pandemic. He said the country is on the right track despite the looming revenue shortfalls.

Yatani disputed that Covid-19 emergency response resources have been misappropriated.

The CS revealed that the economy is resilient, having posted a growth of 4.9 per cent this quarter, compared with 5.5 per cent at the same time last year.

Credit to the private sector has remained stable and the foreign exchange is much better than last year.

Yatani cited the improvement in inflation which stands at 4.4 per cent compared with 6.3 per cent in the same period last year.

“There is a downward inflation path for May, June and July. Inflation for May and June 2020 stood at 5.3 per cent and 4.6 respectively.”

The CS said the Treasury projects to revise economic growth target - worse at 2.6 per cent but above the global average of negative 1.9 per cent.

“We will come out. I’m impressed we are able to hold. Food prices are equally lower than the previous year, the country having received above normal rainfall.”

Yatani exuded confidence that with sufficient food supply, the manufacturing sector will be back on its feet since it is largely agro-based.

He said the economy did not dip much following the interventions rolled out by President Uhuru Kenyatta to cushion businesses and households.

The government, at the height of the Covid-19 scare, gave 100 per cent tax relief to persons earning below Sh144,000 annually, reduced PAYE to 25 per cent from 30 per cent and reviewed Value Added Tax to 14 per cent.

Yatani dispelled fears of the country’s debt level, arguing the current Sh6.7 trillion (close to 60 per cent GDP) compares lowly to other regimes.

“No country has achieved development without borrowing. Our debt is not at adverse levels if you compare with Japan which is at 250 per cent; United States at over 100 per cent; Angola 140 per cent, and UK at 97 per cent. We fall in the lower bracket.”

He said that the Treasury has substantially reduced commercial loans in the face of the pressure of revenue shortfalls.