No end in sight to revenue formula stalemate

Team yet to agree nine days after it was appointed.

• After seven days of intense meetings, members have remained tight-lipped.

• Majority Chief Whip Irungu Kang'ata said getting a solution is more important than the speed of the process. 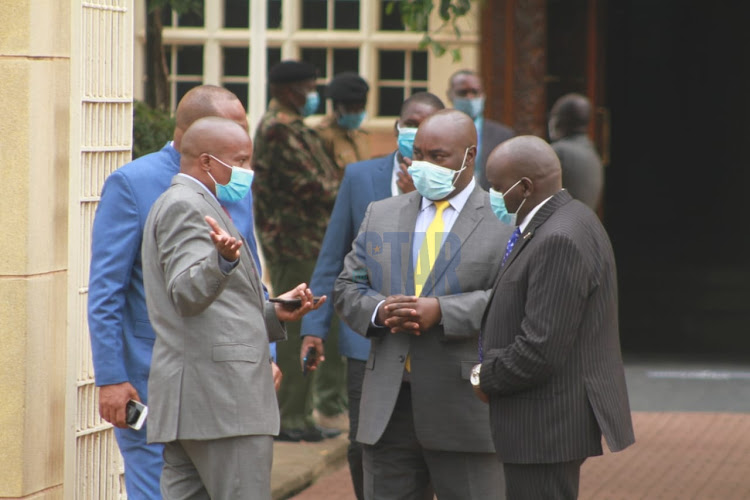 Senators outside the chambers after the Senate was adjourned on Monday, August 17, 2020.
Image: EZEKIEL AMINGA

Counties will have to wait longer to get funds from the National Treasury after it emerged that the ongoing talks on the revenue-sharing formula will take more than expected.

The Senate had failed to agree on the best formula in nine sittings, with the sessions often characterised by high emotions and name-calling. And after nine days of intense meetings, members of the team appointed to broker a deal on the contentious formula have remained tight-lipped.

The Star has established that the 12-member team has yet to agree on the way forward.

"It is still very delicate. We cannot tell when this process will end,” said a committee member, who spoke off the record.

On Tuesday, the team co-chaired by senators Moses Wetang'ula (Bungoma) and Johnson Sakaja (Nairobi) held a daylong meeting in Parliament in an effort to reach an agreement.

“The negotiations are going on well but it is difficult. We cannot promise consensus this week. If anything, we are still looking at various simulations,” the member said, disclosing that the panel was waiting for Treasury CS Ukur Yatani’s response to its plea for additional Sh9 billion allocation to the devolved units.

The team met officials from the Treasury and the Commission on Revenue Allocation (CRA) last Friday when the request for additional funds was floated.

“They have not responded to us but I can tell, it is only the Treasury, through additional allocation, that will resolve this stalemate. It is not that easy,” a senator said.

Senate Majority Chief Whip Irungu Kang'ata said the committee was set to receive submissions from the House leadership to try and hammer out an acceptable solution.

According to the Murang’a senator, getting a solution is more important than the speed of the process.

“We will wait for as long as we can because we just don’t want to hasten the process, but we want to arrive at the best possible solution for all counties,” Kang'ata said.