Police say it was an illegal assembly as they had no permit to demonstrate, didn't observe social distancing. Protests to continue. 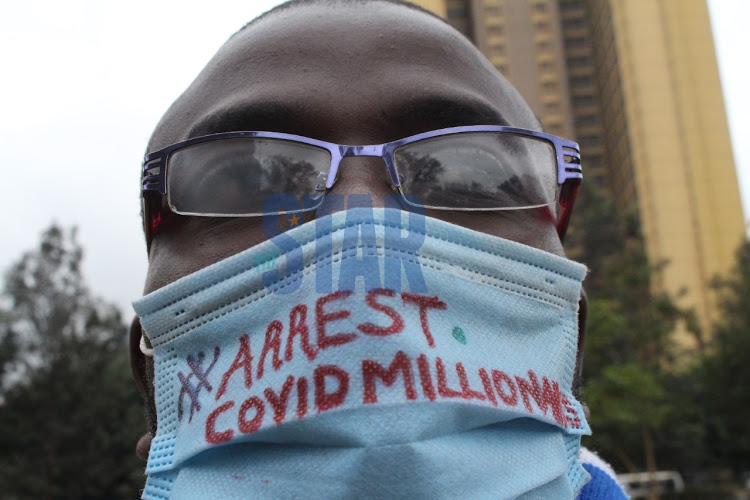 A protester takes part in a demonstration calling for arrest of coronavirus pandemic funds looters at Uhuru Park, Nairobi on August 21, 2020/ANDREW KASUKU

Police fired tear gas on Saturday and arrested at least 12 people among hundreds demonstrating in Nairobi against misspending and theft of Covid-19 funds.

Nairobi Central OCPD Mark Wanjala said the activists were arrested because they didn’t have a permit to demonstrate, thus, it was an illegal assembly. They also didn't observe social distancing to prevent the spread of the coronavirus.

They were taken to the Central police station and later released on bond.

"It was an unlawful assembly, and we expect every Kenyan to follow the law. We also have the government Covid-19 rules that call for social distancing, which they also failed to obey,” he told the Star.

"They paid their bond and we expect them in court next week," he said.

“A number of groups entered the town and met in four venues. A number of them were picked by plainclothes officers on the streets and the venues,” Wanjeri Nderu, who is one of the organisers, said.

"Today we were tear-gassed and assaulted by the police. Those who were arrested have not been booked and their phones have been taken away," activist Boniface Okech said.

The rough number of protesters was not known.

He said most of those arrested were picked from Jivanjee. "Others were targeted from home while walking along the streets,” Okech said.

He called protest a constitutional right and said, "We will not allow the government to limit our democractic space."

Non-governmental organisations and individuals were demonstrating against what they called massive theft of Covid-19 funds, including donations. They called their protests part of a Kenya Tuitakayo movement. 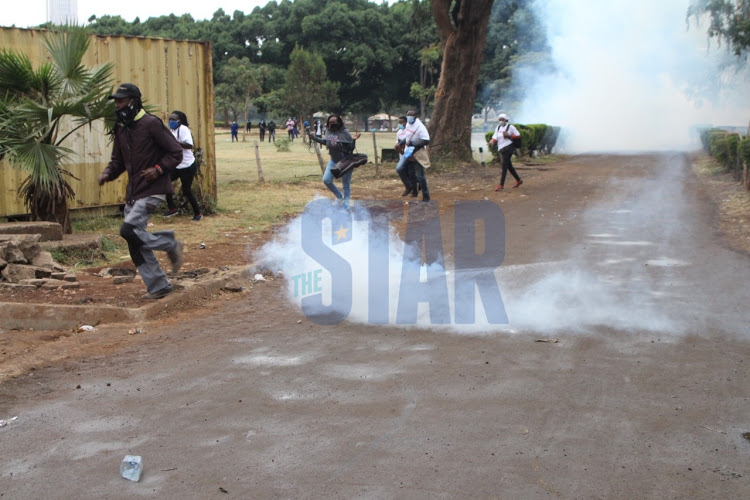 They pledged to continue demontrations countrywide.

"We will be in Kisumu and Nakuru on Tuesday. We are also going to be in Kakamega, Eldoret, Kabarnet and Mombasa among other towns this month," Wanjeri said.

The demonstrations were organised by NGOs to educate Kenyans on the dangers of corruption and put pressure on President Uhuru Kenyatta to recover stolen and misspent Covid-19 funds.

“The government knows what happened at Kemsa (Kenya Medical Supplies Authority) and it knows who picked how much. We want the same government, headed by Uhuru, to go after thieves and support us in liberating the nation,”  Okech said.

They want government agencies to publish the names of companies that benefited from the funds. They want a detailed list of expenditures and donations.

They demand a list of beneficiaries, the market prices of all items acqurired and a forenic audit of all loans connected with the fight against the Covid-19 pandemic.

Activists blamed police for using force to stop the demonstrations.

“They want to silence us. It will not be possible. Kenya is our country and we are here to defend future generations,” organiser Wanjeri said.

Wanjeri said that it was wrong for the government to limit their space while the looters of Covid-19 funds were partying.

“The looters operate with impunity to steal and disregard Covid-19 rules,” she said.