They have given the Nairobi Metropolitan Services a seven-day notice

•Union said some doctors employed by Nairobi county on contract have not been paid for the last six months. 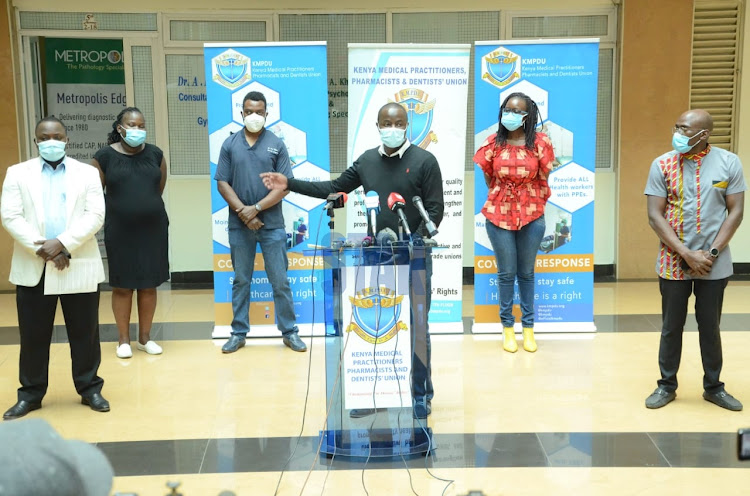 Doctors working in Nairobi County have issued a seven-day notice for a strike to begin on August 21.

They are demanding comprehensive National Hospital Insurance Fund covers, saying their covers have not been active since the beginning of last month.

He complained of persistent salary delays and failure to promote some senior doctors.

In a press briefing on Friday, he also demanded special Covid-19 isolation facilities for health workers.

Thuranira said at least 15 doctors in Nairobi have contracted Covid-19 since community spread began in April.

The medics recovered at home without the need for hospitalisation.

"The union has noted with a lot of concern that the county does not have an isolation facility dedicated for health care workers in the county," Thuranira said.

As of last week, Kenya had lost 14 health workers (doctors and other cadres) to the disease and over 600 infected with the disease.

It is not clear if the doctors were infected at work but two weeks ago Health Cabinet Secretary Mutahi Kagwe said one had travelled outside the country, where he contracted the virus.

Thuranira said the quality of PPEs (personal protective equipment) delivered in city public hospitals was wanting, forcing healthcare workers to improvise with their own equipment. "It is appropriate that the nation and the public at large acknowledge that healthcare workers are always on harm's way," he said.

Late this week, the KMPDU also launched a campaign to demand for better welfare of health workers in Kenya.

The campaign, through their social media platforms, honours Doreen Adisa who was the first doctor to succumb to Covid-19.

"..I am Adisa.. We need beds, equipment, provide them with insurance... my health, my life as a doctor is no longer in my hands," they said.

The doctors asked the government to protect the doctors and provide them with mental services.

At least 768 medics have tested positive for the virus as of August 10.
News
2 years ago
Post a comment
WATCH: The latest videos from the Star
by JOHN MUCHANGI Science Editor
News
14 August 2020 - 14:41
Read The E-Paper