Inside Kiunjuri’s plan to build TSP into national movement

Party intends to begin registration of members and opening of offices in 27 counties. 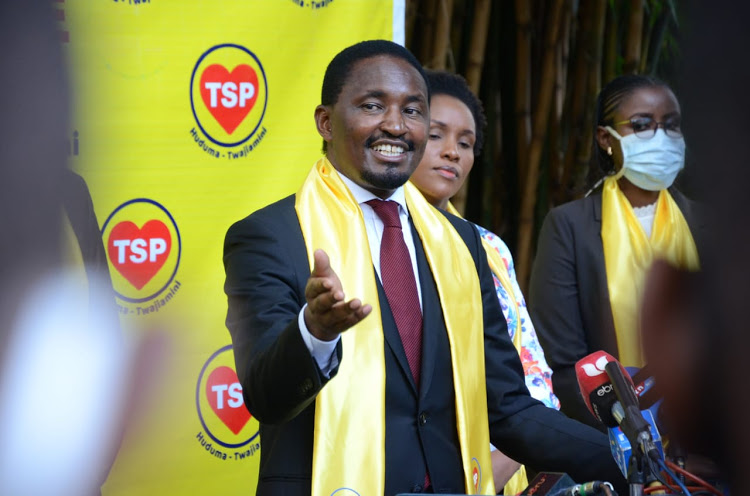 The Service Party has begun plans to position itself as a force to reckon with ahead of the 2022 General Election.

TSP party leader and former Agriculture CS Mwangi Kiunjuri said he has a plan to market the party he unveiled in June across the country.

Kiunjuri, who was dropped from the Cabinet by President Uhuru Kenyatta in January, said they have mapped the country and he will be opening new offices in 27 counties.

“When we unveiled TSP, I announced that we will be embarking on listening tours targeting to meet at least 1,000 people in 27 counties. This was pegged on our expectations that protocols put by the Ministry of Health to deal with Covid-19 would be eased but the other day it was announced that there will be no political rallies and we will abide by that,” Kiunjuri told the Star.

He said they will adopt the use of technology to reach out to interim county officials who will be given directions on how to proceed in recruiting members to the new political outfit they expect to fill the void left by the squabble-ridden Jubilee Party.

“The 2022 General Election is fast approaching and we want to make TSP the party of choice. We are already in the process of rolling out key structures that will see our party have a presence in every subcounty in the country,” he said.

He added, “We want to unite our people so that they speak in one voice on development issues such as the ongoing debate on revenue. TSP is ready to offer a home to our people so that in the future, we do not find ourselves in the situation we are in now.”

On Tuesday Kiunjuri chaired a strategy meeting and key on the agenda was to take stock of the country’s voting patterns in the 2017 General Election and how TSP can take advantage of the wrangles in the ruling Jubilee to position itself as the alternative party especially in Mt Kenya and Rift Valley.

“TSP is a service party founded on the need for servant leadership and the unity of this country. And as we approach the 2022 elections, we would like to identify leaders who are committed to these ideals,” Kiunjuri said in a phone interview.

President Uhuru Kenyatta and Deputy President William Ruto have fallen out and the support their Jubilee Party enjoyed seems to be dwindling by the day.

There are signs that Ruto who is keen to succeed Uhuru will not be seeking the JP ticket in 2022 presidential race and TSP is one of the parties he could use.

Kiunjuri reiterated that he will not be running for any elective seat in the upcoming election, affirming that he will be ready to serve in any position.

Being one of the senior politicians from Mt Kenya region, Kiunjuri is seen as among the top candidates for Ruto's running mate.

“The DP remains a friend to me and the larger Mt Kenya region. He has stood with the President and his support has been unwavering and we thank him for that,” he said.

The TSP leader called on Kenyans to support leaders with a development record in the 2022 election and who are committed to addressing economic challenges like unemployment, saying “governments are formed to make lives easier and not this hard”.

“We have seen the suffering our people have gone through and we should use the 2022 election to change that by electing leaders who are genuinely ready to change Kenya. We should not allow the difference between the rich and the poor to continue to grow as is the case now,” he noted.

Kiunjuri is among the front-runners to succeed Uhuru as the Mt Kenya kingpin.

Uhuru is due to retire from active politics after serving the constitutional two terms by August 2022.

Kiunjuri is tipped to fit into the President’s shoes considering his experience.

On two occasions last year, Kiunjuri managed to convene a meeting of members of the National Assembly and the Senate who took a position on the  Building Bridges Initiative task force.

Mt Kenya has a population of about 7.9 million, according to the 2019 population census, which by far is the country’s largest, making the region the epicentre of 2022 politics.