Development a major a setback in the fight against Covid-19 pandemic at public health facilities. 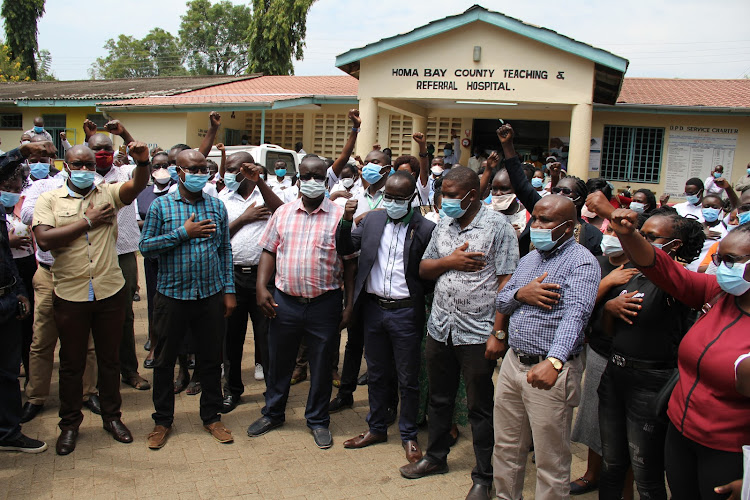 Homa Bay health workers began their strike on Monday as they asked Governor Cyprian Awiti to intervene over unpaid salaries.

The medics drawn from different cadres downed their tools complaining that the Homa Bay government has consistently failed to address their grievances about salary delays.

Unions representing doctors, nurses, clinical officers, laboratory technicians, pharmacists and dentists vowed not to resume work until they are paid.

The health workers have not been paid their salaries and allowances for June and July.

The strike is a major setback in the fight against covid-19 pandemic at public health facilities.

Osuri termed the Homa Bay government as a difficult employer who does not motivate and provide necessary working tools to employees.

He stated that they will return to work only after all their dues are paid.

“The money we demand is available because it had been budgeted for. It belongs to 2019-2020 financial year. The employer is just difficult and making the working environment hostile,” Osuri said.

Addressing journalists when they started their salary parade at Homa Bay County Teaching and Referral Hospital, the union officials told all health workers stationed at different centres to stay at home indefinitely.

Osuri argued that health workers who were assigned to isolation centres were not provided with protective gear against Covid-19.

“We’re appealing to Governor Awiti to be personally involved in the money matters. It’s only money which will make us return to work,” Osuri said.

The medics said their statutory deductions such as the National Hospital Insurance Fund and NSSF are not remitted.

They demanded they be given enough personal protective equipment.

Dulo told the county government not to peg their delayed salary remittance to the revenue sharing formula stalemate in the Senate.

He questioned why they are not be given adequate PPE.

“The financial distribution crisis at the Senate does not apply here since we’re demanding what belonged to the previous financial year. Give us PPE because it has nothing to do with revenue sharing bill,” Dulo said.

They  called on the Ethics and Anti-Corruption and the Directorate of Criminal Investigations to investigate the whereabouts of their June and July salaries if the Homa Bay government claimed it didn’t have the money.

"Our colleague nurse Marian Awuor died in Kisii because we lack enough facilities to handle emergency health matters," he added.

Mbom and KNUN deputy secretary Omondi Nyonje said the employer has not communicated on the reasons why they have not got salaries.

“We’re telling patients in Homa Bay to seek health services elsewhere because they will not be attended to at county public health facilities,” Mbom said.

However, health executive Richard Muga said the salary delays have been prompted by late disbursement of funds from the National Treasury.

“The issue of salary delays will be addressed once we receive money from the national government account,” Muga said.