Duale takes on Matiang'i over delayed IDs for 18,500 Kenyan 'refugees'

• In 2017 President Kenyatta said it was not a favour to issue the locals with IDs but a right for every eligible Kenyan.

• He directed that a task force be formed to review cases, but that team's report is yet to be released. 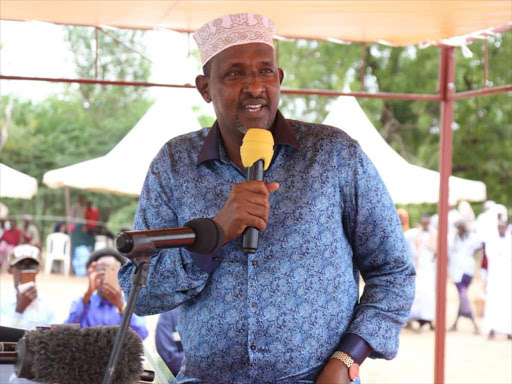 Former leader of Majority Aden Duale wants the Interior ministry to explain why 18,500 stateless youths in Garissa and Wajir are yet to get identification cards.

Those Kenyan Somalis are currently registered with the UNHCR as refugees.

The Garissa Township MP says Interior Cabinet Secretary Fred Matiang’i should provide a report of the task force formed to chart a plan for issuing the lot with IDs.

In 2017, President Uhuru Kenyatta directed the Interior ministry to develop a framework to oversee the registration.

The President, who was responding to pleas by Northeastern leaders,  acknowledged“it was not a favour to issue the locals with IDs but a right for every eligible Kenyan.”

The task force was formed in August last year to develop a procedure of vetting, verification and eligibility criteria for the stateless Kenyans.

The affected individuals were to present their parents' citizenship documentation, information the task force checked with local elders, chiefs and government agencies.

“The verification was conducted but since then nothing has come out of it,” Duale said in his request for statement from the Security committee of the National Assembly.

Regional leaders say that Garissa and Wajir “have over the years suffered a disproportionate number of young men and women without national IDs.”

Duale attributed this to “their inadvertent registration as refugees in Dadaab at Ifo and Dagahlay camps.

“Their registration as refugees was an act of desperation by their parents to escape the distress of severe drought of the 1990s.

The MP wants the Interior ministry to provide the committee with details of when the said youths will be provided with IDs.

He also wants Matiang’i to provide the timelines on when he will implement the President’s 2017 directive on the registration of persons in the said areas.

“We also want word on what the task force did after the verification process was completed,” Duale said, adding that the situation infringes on the affected persons’ rights.

Rights groups have repeatedly raised concern that Kenyans of Somali descent face suspicion and discrimination whenever they apply for IDs.

Two legislators from Garissa county have urged the government to fast-track a report on issuing IDs to Kenyans registered as refugees.They said ...
Counties
6 years ago

Victims risk being stateless since they are not recognised by the Kenyan government.
Counties
3 years ago
Post a comment
WATCH: The latest videos from the Star
by MOSES ODHIAMBO Journalist and Political Writer
News
20 July 2020 - 19:00
Read The E-Paper