DP breaks silence, calls for a united party for the government to effectively serve Kenyans.

• Earlier this month, the DP called on the country's spiritual leaders to pray for his political allies.

• Deputy President William Ruto has struck a conciliatory tone after his allies were removed from key parliamentary positions in the past few weeks. 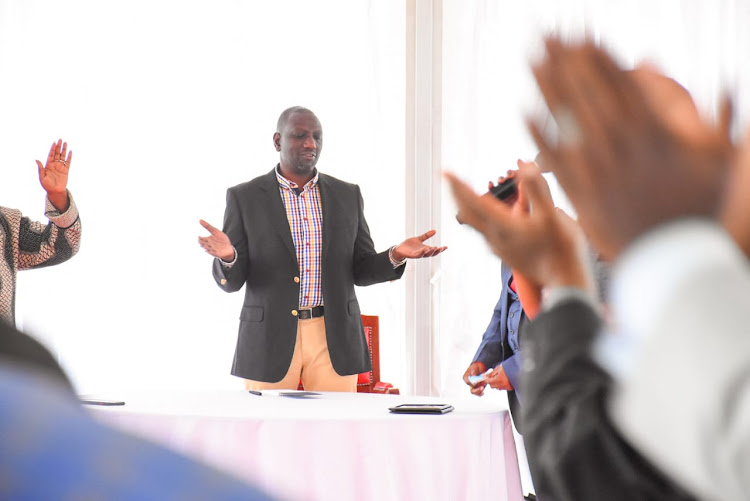 Deputy President William Ruto when he hosted prayers with the clergy from Nyeri County in Karen on July 7, 2020.
Image: DPPS

Deputy President William Ruto has struck a conciliatory tone after his allies were removed from key parliamentary positions in the past few weeks.

Ruto on Thursday broke his silence on the purge of his allies and called for unity within the Jubilee Party in order for the government to effectively serve Kenyans.

"With the changes in Parliamentary leadership including committee membership and leadership now concluded, I urge all MPs not to be divided but work together in serving the people. Col.3:23, Whatever you do,work at it with all your heart, as working for God, not human masters," the DP tweeted.

Earlier this month, the DP called on the country's spiritual leaders to pray for his political allies.

Ruto said it was unfortunate that those who support him have been subjected to unnecessary humiliation and frustration.

MPs on Tuesday finally approved the list of reconstituted House committees ending days of haggling between the Jubilee and ODM sides.

The changes according to Leader of Majority Amos Kimunya and his Minority counterpart John Mbadi are to re-energise the committees.

Mbadi said this was especially in line with Parliament’s role in the implementation of the expected Building Bridges Initiative report.

The two largest parties included in the Justice and Legal Affairs Committee, members perceived to be loyal to President Uhuru Kenyatta and ODM leader Raila Odinga.

Kuria was also removed from the Transport committee as vice chair and will serve as a member of the Implementation Committee.

Last month Majority Chief Whip Emmanuel Wangwe wrote to 16 Jubilee MPs, notifying them of plans to discharge them from key committees in the National Assembly.

The MPs, mostly Ruto allies, were later axed from their posts.

The letters come barely a day after Wangwe was made the Chief Whip after Benjamin Washiali and his deputy Cecily Mbarire were also kicked out following a Jubilee Parliamentary Group meeting at State House.

The two are perceived to be Deputy President William Ruto's allies.

In the same month, Garissa Township MP Aden Duale was axed from the powerful position of National Assembly Majority Leader post and was replaced by Kimunya.

This was after a Jubilee PG meeting chaired by the President at the KICC.

In the Senate, Majority Chief Whip Irungu Kangata said they had firm instructions from the President to ensure they diffuse ‘diversity and inclusion’ in the leadership of the house committees in line with the spirit of the ‘handshake.’

In the new line-up, Nyamira Senator Okong'o Omogeni and his Homa Bay counterpart Moses Kajwang, were elected as chairpersons of Justice and Legal Affairs and Human Rights Committee and Devolution and Intergovernmental Relations committee respectively.

Mogeni replaced Nandi Senator Samson Cherargei, a DP confidant who was removed from the position in May.

Kajwang, on the other hand, take over from Laikipia Senator John Kinyua, another Ruto ally who was also purged.

Says his allies are being threatened with courts, EACC, KRA and loss of political positions.
News
1 year ago