More than 900 girls get pregnant in Kenya every day - report

7.6 per cent of the respondents supported the need to abandon harmful cultural practices such as FGM.

•From the report, 13,000 girls drop out of school due to pregnancy every year.

•The youths pointed that girls sometimes have sex to purchase menstrual hygiene products such as sanitary towels. 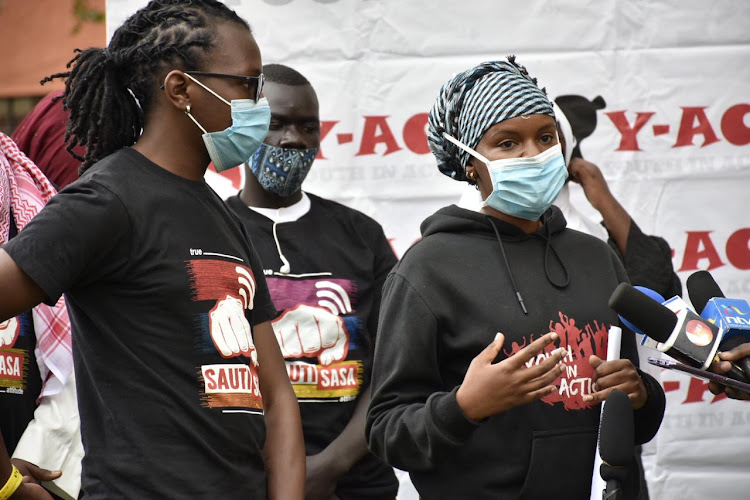 SURVEY: Rasheed Mutaha and Wanjiku Mwangi from Y-ACT Amref during the launch of a teenage pregnancies report at Naya Centre on July 10,2020
Image: MERCY MUMO

Nine hundred and forty eight girls get pregnant in Kenya every day, the latest report shows.

The report, ‘Teenage pregnancies in the eyes of adolescent and youth in Kenya’, was launched on Friday by the Y-ACT Amref.

In an effort to represent youth voice in addressing teenage pregnancies, Youth in Action reached out to Kenyan youth through an initiative called Sauti Sasa Youth Voices.

The aim was to have them share their opinions on what they believed were the predominant causes of teenage pregnancy and the solutions they would propose to reduce the rising crisis.

The survary was conducted between September and October 2019, targeting 650 youth from all the 47 counties in Kenya.

Of the 650 voices collected in the qualitative survey, 76 per cent were female and 24 per cent were male aged between 15 and 35 years.

From the report, 13,000 girls drop out of school due to pregnancy every year, while one in three adolescents is either pregnant or has started the childbearing process.

The report further states that 7.6 per cent of the respondents articulated the need to abandon harmful cultural practices such as Female Genital Mutilation, child marriage and child beading in order to reduce teenage pregnancies in certain regions in the country. 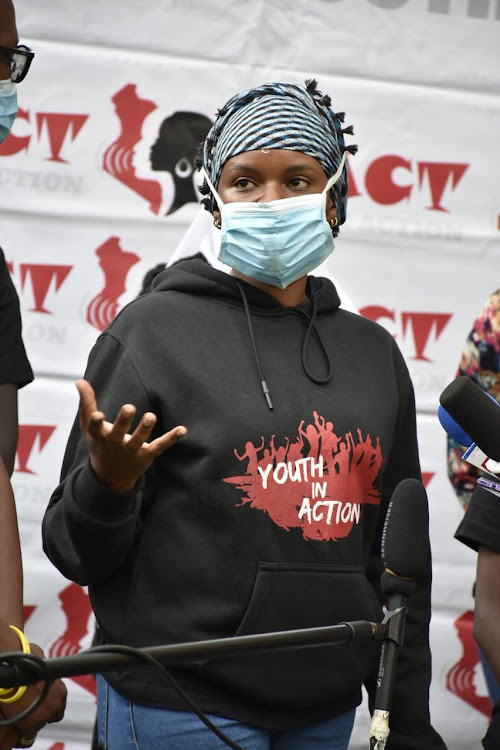 Wanjiku Mwangi from Y-ACT Amref during the launch of teenage pregnancies report at Naya Centre on July 10,2020
Image: MERCY MUMO

The report points out that the practice remains prevalent in several Kenyan communities and contributes greatly to teenage pregnancies.

“However, the youth maintained that the data published on the rates of FGM and child marriage remain unrepresentative of the real situation on the ground,” the report states.

They recommended intensive research by stakeholders to truly reflect the prevalence of FGM in the country.

The report also shows that only 4.4 per cent of the respondents cited poverty and lack of economic opportunities as a key drivers of teenage pregnancies in Kenya.

“This, however, should not devalue the devastating impact of poverty on teenage pregnancies in the country. Poverty and lack of economic opportunities subjects many girls to early marriage and transactional sex,” the report says.

In the survey, youths pointed that girls sometimes have sex to purchase menstrual hygiene products such as sanitary towels as they are mostly expensive in the Kenyan market.

Poverty is linked to many families living in informal settlements. Key to note is that a family of five to 10 people often has to share one room.

“Privacy or boundaries do not exist in these spaces. Children are not sheltered from their parents’ sexual activities which in turn results in early onset ages in sex for these curious teenagers. It is not uncommon to find that rape and defilement cases are amplified in these informal settlements.”

Nine per cent of the respondents cited inadequate enabling environments for the mitigation of gender-based violence; a number were very clear on the lack of information on when and how to report sexual and gender-based violations and protocols for evidence preservation.

The youth also noted that with most perpetrators being people close to these young girls, out of court settlements impede justice in the name of preventing further shame to the families of these children who have been raped.

Besides, the Kenyan court process is long, tedious and expensive further discouraging victims of sexual and gender-based violence from seeking justice.

To add salt to injury, many perpetrators are released on bond and easily integrate back into the communities.

The youth voices challenged the political class to support the end of teenage pregnancies by not only tabling bills but also championing their implementation in the communities they represent.

The youths noted that integration of sexuality education in the education curriculum can no longer be a matter of negotiation.

The youths also noted that they often feel uncomfortable or judged by health caregivers when they seek access to sexual and reproductive health services.

“This is because we live in a society that cringes at the thought of teenagers discovering their sexuality and would rather turn a blind eye.”