DP's talks with Party of Development and Reforms are at advanced stage, sources say

• DP exploring options if as expected he loses out on the Jubilee ticket. 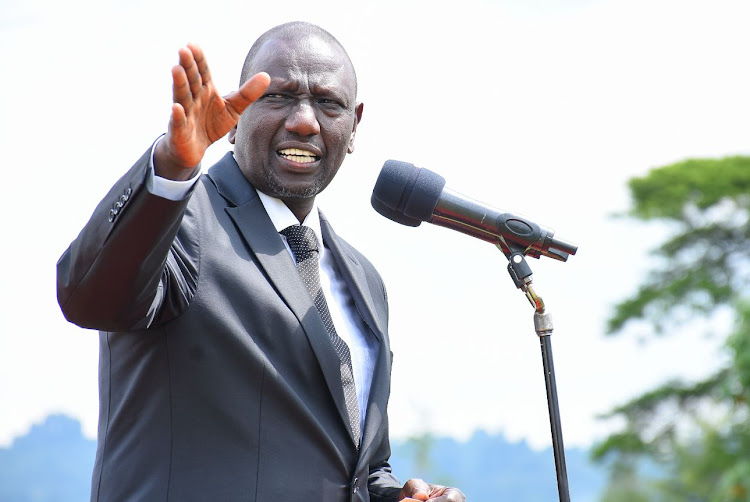 Deputy President William Ruto is quietly shopping for an alternative 2022 political vehicle as he signals a ruthless battle against his boss, President Uhuru Kenyatta.

For the first time after months of a hiatus, the DP on Saturday claimed his allies are being politically annihilated in a jibe that appeared clearly directed at Uhuru.

Uhuru has engineered radical changes in Parliament with nearly all Ruto's foot soldiers unceremoniously sacked because they did not toe his line and advance his agenda.

His political future in the Jubilee Party in doubt, Ruto is scheming an exit strategy enabling him to run for the presidency in 2022 on a different political ticket.

Sources aware of the intrigues say the DP's strategists are considering a takeover of the Party of Development and Reforms (PDR).

PDR has strength in pastoralist communities and is also affiliated to Jubilee.

Ahead of the 2017 polls, PDR was operating from Ruto's private office at the Transnational Bank House along City Hall Way.

The ninth floor office used to be the DP’s workstation since 2007 when he was MP for Eldoret North.

Sources said the party could be re-branded and its name could be changed.

Ruto would then enter into pre-election coalition agreements with other parties to build a gigantic political machine.

The United Green Party (UGP) and the Grand Dream Development Party (GDDP) are other parties Ruto strategists would try to bring on board.

The plan is also to reach out to Musalia Mudavadi's Amani National Congress as well as Moses Wetangula's Ford Kenya.

The PDR is expected to soon launch a massive re-branding and popularising campaign aimed at positioning it ahead of 2022.

PDR is currently in a binding pact with Jubilee.

However, that doesn't diminish its autonomy as an independent political entity.

Registering a new political party is a herculean task, requiring even the approval of the National Intelligence Service, the spy agency.

“DP Ruto is in Jubilee to stay. He is the deputy party leader. How can he abandon a house he built?” Talam asked.

On Sunday, PDR officials declined to comment on the developments for fear of undermining their relationship with the President but left no doubt about Ruto's ‘imminent takeover’.

“Take it to the bank that PDR is not barred from exploring new partnerships in light of the 2022 polls,” a high-ranking PDR member told the Star.

The member insisted that currently, PDR is honouring its marriage with the Jubilee Party.

“Our constitution provides how we can exit a coalition agreement. For now, we are in Jubilee as a coalition member until otherwise,” he said.

An MP told the Star in confidence, however, that a final decision is yet to be made to avert frustrations by state functionaries.

"We are playing around with like four parties. You will be hearing of many parties. We agreed to play around to remove the focus from any one of them,” the Ruto ally said.

The thinking behind using PDR, an insider said, is that Ruto does not appear to have left Jubilee, hence, would maintain the sympathy vote without actually being kicked out of the ruling party.

Under the law, Ruto is a member of Jubilee Party until he resigns.

He could lose his position as DP if he is found guilty of openly articulating the policies of a different party.

The DP's quiet move to shop for an alternative party stems from fears that he is likely to be denied the Jubilee presidential ticket following his falling out with the President.

Uhuru has managed to seize total control of Jubilee after kicking out the DP's confidants from key leadership positions.

The onslaught has diminished Ruto's prospects of getting the Jubilee ticket and there are indications Uhuru is determined to obliterate him.

On Saturday, Ruto who has been tight-lipped over the purge of his key allies maintained his troops were being targeted by the state machinery because of their support for him. Previously he has used his allies as surrogates to criticise the purge.

He addressed a prayer meeting with the Association of Bishops from Rift Valley led by Bishop Eliud Karanja of the WorldWide Church, Sugoi, Uasin Gishu county.

The DP warned that ethnic divisions had now been turned into political divisions to deal with anyone seen as being close to him.

“Am I not a Kenyan and in need of friends as well?” Ruto quipped in his first public statement after enduring months of a sustained onslaught by Uhuru.

Taking on Uhuru, the DP had on Friday dismissed Jubilee's coalitions with other political parties, calling them part of a scheme to thwart his 2022 presidential ambitions.

"When you see them coming together because they want to stop me, it means I am not a weak candidate. Just pray for me and you will see. They will be shocked," Ruto said during a burial in Nandi county.

The DP’s bold move was seen as a direct attack on Uhuru who sanctioned Jubilee’s post-election coalition agreement with Ruto’s rival Gideon Moi, the Kanu boss and Baringo senator.

Opposition chief Raila Odinga, another Ruto foe, is working with Uhuru through the nine-point agenda outlined in his 2018 handshake deal with Uhuru.

Uhuru's camaraderie with Ruto's foes appears to have diminished the DP’s influence in the 2022 succession.

“Why is there a fuss about the party? Why is everyone focussing on Ruto’s moves?” he asked.

The lawmaker, a fierce Ruto defender, said there was no way they can hold talks with PDR yet that entity is in a coalition with the Jubilee Party.

“It is the only one with a coalition agreement with Jubilee. At the formative stages of Jubilee, we collapsed all other parties but PDR was given special treatment since it had special interests that could not be catered for by the larger Jubilee,” Kositany said. It was an apparent reference to Kenya’s vast pastoral community.

His Mumias East counterpart Ben Washiali also dismissed the assertions as “rumours that are characteristic of Kenyan politics”.

“We are Jubilee members and the party has not been disbanded yet. PDR has its owners. If we wanted to move to PDR we would have moved long ago. This is just a rumour, the Kenyan way,” the lawmaker said.

Political analyst Martin Andati said he had heard of the ongoing negotiations but said it was too early to conclusively say the DP has settled on the party.

“He must be preparing to exit but he has shown his cards too early. You cannot leave the government two years to the election. It is a good move but at the wrong time,” Andati said.