ONE WED AT MEDICAL SCHOOL

• They returned on the same date they enrolled half a century ago. 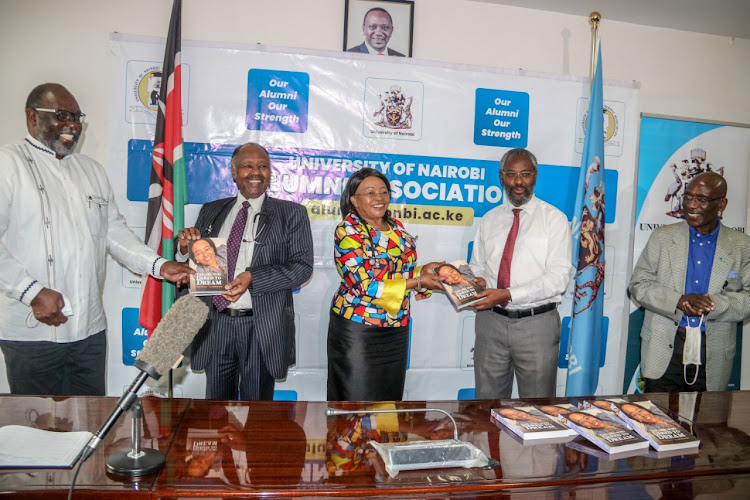 Two medical alumni of the University of Nairobi returned to their alma mater last weekend with Sh6 million scholarship offer for five students.

Cardiologist Betty Gikonyo and psychiatrist Frank Njenga graduated from the UoN's School of Medicine 45 years ago - 1975.

The Sh6 million scholarship starting 2021 will benefit the select students every year.

Gikonyo and Njenga have fond memories for the institution that made them the success they are today.

July 4 will for ever be etched in their mind for it is the date in 1970 that they enrolled in the School of Medicine.

As the septuagenarian reminisced fondly about the university that built their childhood dreams,

For Gikonyo, the Karen Hospital co-founder and CEO, the memories go deeper - she met Daniel Gikonyo, her husband of 46 years in her second year. Three years later, they wedded at the school.

The 70-year-old, who Saturday was dressed sharply in patterned yellow and black, smiled nostalgically at the sight of a small garden which provided a scenic view for their photo shoot after the reception at the school cafeteria.

“This is where we had our photo shoot,” she said pointing at the garden. “Catering was provided at the school cafeteria because ours was a budget wedding. I was a fifth year student,” Gikonyo said.

As she recounted the details of the Sh700 budget wedding, which the couple had to pay in instalments, her face glowed.

“Being students, we could not afford to raise the Sh700 and were left with a debt of Sh300 which we paid in bits later. All we had was love and that is all we saw,” she said.

The marriage was not an impediment to her professional success as she knew how to balance her personal life and education, she said.

“I still passed my examinations while being a good wife and a mother. I made time for everything,” she explained.

In 1975, Gikonyo graduated with MBCHB and after her internship in Nakuru, returned to the UoN for a Master's in Paediatrics.

On his part, Njenga apologised for leading strikes at the university. He said he was young and failed to look at other avenues of redressing issues.

“I had a misguided energy of youth, and raised the flag of freedom, leading at least two strikes. Fifty years later, I come to seek forgiveness,” he said.

“Leaders can sometimes misinterpret the way of thinking of the youth. When you accept and talk to them, it is easier to manage them,” he advised.

He encouraged students to work diligently and persistently to reap the promise of consistency.

“Consistency is always rewarded. The older you get, the more you realise that there is greater satisfaction in giving back. The current preoccupation with accumulating so much money is sickening,” he said.

The two stated that they have kept together as they provide social capital developed from years of knowing each other.

They also spoke about the ongoing coronavirus pandemic and reiterated the need to follow government directives.

“This might affect our mental health but the most important thing to remember now is that nothing is permanent. We always emerge victorious,” Njenga said.

Vice-Chancellor Peter Kiama, who received the scholarship, lauded the two medics and encouraged other alumni to come back and support the university.

"I am grateful for the solid foundation that you laid in the alumni and the exemplary leadership which has continued to inspire the Alumni Association to grow in size and impact," Kiama said.

The two are founding members of the University of Nairobi Alumni Association which was formed in 2005 with Gikonyo as the founding chair.

Post a comment
WATCH: The latest videos from the Star
by Akello Odenyo Court Reporter
News
06 July 2020 - 23:00
Read The E-Paper