Uhuru shifts from State House to Harambee over Covid

The Office of the President, OP, is now in Harambee House, where strict health protocols are in place. 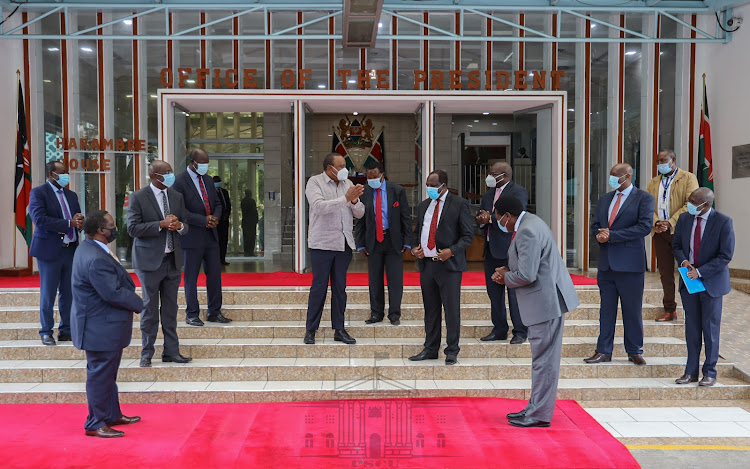 President Uhuru Kenyatta has moved his office operations to Harambee House after State House was locked down because four staff tested positive for the coronavirus.

He has been working from Harambee House, now designated the safer Office of the President (OP). His staff has also moved there.

The President had been working from State House until Covid-19 hit the House on the Hill on June 15. Now he holds meetings at his new OP.

Before then, the President had hosted delegations at State House, including MPs for Parliamentary Group meetings, as well as some politicians.

He hosted an extraordinary summit meeting with the country's 47 governors on June 10 at State House to discuss Covid-19 preparedness.

However, after State House confirmed four Covid-19 cases, entry was limited and most staff were asked to stay home to contain spread of the virus.

The nerve centre of the President’s operations will now be OP and he will only go to State House occasionally for pressing matters.

On Tuesday, President Kenyatta went to State House to assent to the Finance Bill, 2020, with a limited number of officials present.

A highly placed source in the President’s office said the move was decided on to ensure that Uhuru and his family are safe.

“State House was sealed off after the four cases were confirmed. The President is currently operating from his OP office to guarantee him maximum safety,” the source aware of the President's operations told the Star on Friday.

At his new OP, strict protocols have been put in place to minimise access to the President. Only though who pass rigorous health checks can enter.

“Strict procedures have been established to ensure those who meet the President get clearance after being subjected to procedures to ascertain they are Covid-19 free,” the source added.

The President is expected to continue working from the new office. The Kenya International Conference Centre will accommodate large delegations.

The President handed over a 52-seater bus to Nzoia Sugar Company chairman Joash Wamang'oli. The bus will be used by the company’s football club.

The President donated Sh2 million to the team.

On Thursday he worked from OP before moving to KICC to close a two-day training workshop on Kazi Mtaani for regional and county commissioners.

President Kenyatta charged them with ensuring transparency in recruitment of youth into the programme.