• The county officers, according to the auditor, either violated laws and processes in the award of the contracts or failed to provide supporting evidence including procurement documents.

• They include procurement of pesticides at a cost of Sh8.3 million, installation of a Sh3 million outdoor billboard at the Kitui main bus station, procurement of booklets worth Sh37.4 million and Sh8 million paid to various insurance companies. 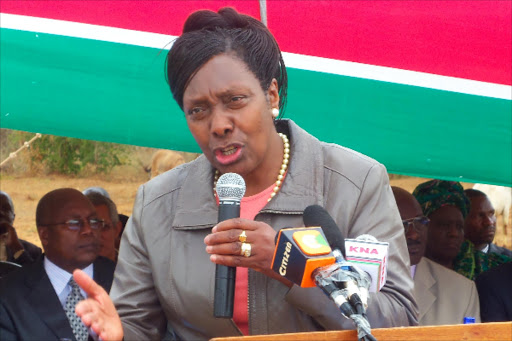 Kitui Governor Charity Ngilu at a past function.
Image: FILE

This comes at the time the county MCAs are angling to impeach her over alleged abuse of office and gross violation of the Constitution.

On Friday, the Senate County Public Accounts and Investments Committee invited the anti-graft agency after an audit report revealed systematic violation of the procurement laws and processes in the Ngilu- led administration.

Appearing before the watchdog committee, Ngilu was hard pressed to explain why her administration violated procurement laws and processes in the award of more than Sh150 million contracts.

According to 2017-18 audit report the expenditures of the Kitui county executive by former Auditor General Edward Ouko, the County violated laws and process in the award of the tenders.

This was during Ngilu's first year in office as the second governor of the county.

The county officers, according to the auditor, either violated laws and processes in the award of the contracts or failed to provide supporting evidence including procurement documents.

They include procurement of pesticides at a cost of Sh8.3 million, installation of a Sh3 million outdoor billboard at the Kitui main bus station, procurement of booklets worth Sh37.4 million and Sh8 million paid to various insurance companies.

"Govenor , I am sorry , you have a big problem on your hands because all the issues here are about procurement. At this time, I am inviting the EACC to look deeply into this issue of procurement," committee chairman Sam Ongeri (Kisii) said.

According to the report, the procurement team used a request for quotation method and a total of 26 suppliers were given the contract to supply various quantities of pesticides.

"However, this amount was above the prescribed value of Sh2 million which is the allowable limit for amounts to ensure it did not go beyond the Sh2 million mark," reads the report in part.

This, according to the auditor, amounted to violation of Section 54 of the Public Procurement and Asset Disposal Act , 2015.

The Act states that no entity may structure procurement as two or more procurements for the purposes of avoiding the use of a procedure except where prescribed.

"The method adopted was request for quotations and no justification was given as to why the method was preferred to the open tender," reads the report.

Ngilu said the procurement was split for the purposes of ensuring maximum participation of citizen contractors, disadvantaged groups, small and micro enterprise in public procurement and within the county.

"This was so since the pesticides were sourced from each of the 40 wards of the county government," she said.

The county chief, through her procurement chief officer, that the county adhered to legal notice No.114 of June 18, 2013 (Public Procurement and Disposal (Preference and Reservations) (Amendment Regulations of 2013) in splitting the Procurement.

But the response did not satisfy the 11-member committee chaired by Ongeri.

The senators termed the law cited for the split of the procurement as obsolete and challenged the officials to present the Act that allowed for such changes.

"That law is obsolete and outdated. In short, there is no law like that. Let the county admit that it violated the law and we move ahead and make necessary recommendation," Migori senator Ochilo Ayacho, a lawyer by profession, said.

Kitui senator Enoch Wambua demanded to know why only 26 wards were considered yet the procurement was to cover all the 40 wards.

Ngilu said that the procurement was divided to enable the disadvantaged groups in the county, especially women, to benefit.

But her response was questioned as Nandi Senator Samson Cherargei cut her short, saying the governor should not use the women and disadvantaged group as a justification for violating the law .