Kenya to buy pneumonia vaccine at half price

Country aims to eliminate pneumonia deaths in children by 2025. 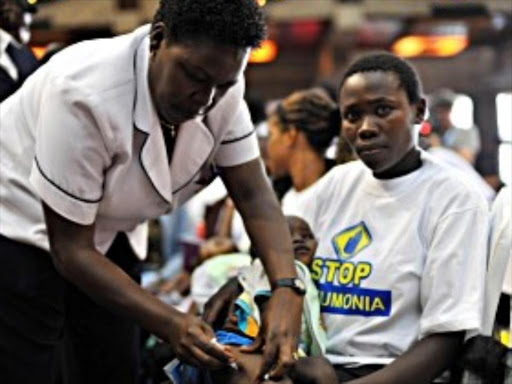 A child is injected with pneumococcal vaccine.

Kenya will now buy pneumonia vaccine at a reduced cost following a deal between three institutions involved in supply.

This is a boost to the country's ambition to eliminate pneumonia deaths in children by 2025, through widespread vaccination against the disease.

A dose will now cost Kenya Sh200 ($2), said Gavi, the global alliance that procures vaccines for Kenya and most developing countries.

Gavi made the deal with Unicef and the manufacturer, Serum Institute of India (SII), to lower the price from Sh350 ($3.50) a dose.

Kenya was among the first African countries to introduce the pneumococcal conjugate vaccine PCV10, which protects against 10 strains of the bacteria, in 2011.

A large number of Kenyans carry the pneumococcus bacteria, which causes pneumonia, in the back of the nose without any symptoms.

But it is often fatal in many unvaccinated children.

Pneumonia was listed by the Kenya National Bureau of Statistics 2017 Economy Survey as the leading cause of death, with an average of 21,000 deaths every year.

The supply agreement is the eighth to take place under Gavi’s Advance Market Commitment mechanism, and the first to include a developing country manufacturer.

Under the agreement, the Indian manufacturer will provide 10 million PCV doses to Gavi-supported countries each year for the next 10 years.

The AMC, which is set to end this year, was launched by Gavi in 2009 with the support of donors Italy, the United Kingdom, Canada, Russia, Norway and the Bill & Melinda Gates Foundation.

It was meant to solve a clear example of market failure: Complex vaccines such as PCV would normally reach low-income countries, where the disease burden is often highest, 10-15 years after their introduction in industrialised countries.

The AMC mechanism incentivised research and development, particularly for vaccines suitable for developing country epidemiological contexts, and an expansion in manufacturing capacity to meet demand from lower-income countries while maintaining an affordable price per dose.

A decade later the results are clear: The PCV vaccine has now been introduced in 60 lower-income countries, where coverage rates, at 48 per cent, are now higher than the global average of 47 per cent.

Estimates indicate that more than 225 million children will have been vaccinated, and that over 700,000 deaths will have been prevented by the end of 2020.

“This is fantastic news, which will make this highly effective, lifesaving vaccine even more affordable for the world’s poorest countries, and is a testament to the success of Gavi’s pneumococcal AMC mechanism, which has now achieved everything it set out to do,” said Aurelia Nguyen, Gavi’s Managing Director for Vaccines and Sustainability.