• According to the Kemri report, about 2.6 million Kenyans already have the coronavirus.

• Scientists came to the conclusion after testing donated blood for antibodies. 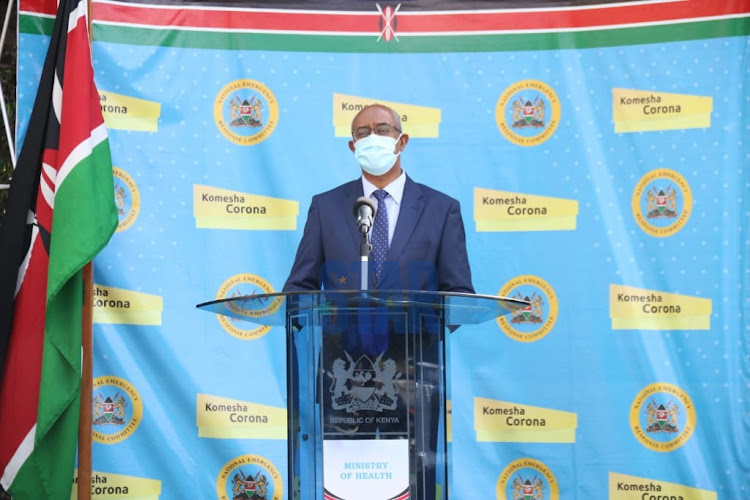 The sample used to conclude that 2.6 million Kenyans might have coronavirus might not be representative, CAS Rashid Aman has said.

He, however, noted that almost 12 per cent of the Nairobi population seems to have been exposed to the virus.

Speaking during his daily briefings on Friday, Aman said with the numbers, the ministry is continuing to build up on the representation.

"The sample size is fairly small.. it may not be perfectly representative of Kenya. They are samples from blood donors..." he said.

"The results were not ready for the public domain. The ministry commissioned the study and through the National Blood Transfusion Services collected blood from its six regional centres. The samples were tested against the Covid-19 to ascertain if they had generated any antibodies."

Aman said the ministry commissioned the study with Kemri to look at the rate of prevalence of Covid-19 quickly.

"We wanted to get an idea of the numbers of Kenyans exposed to the disease. We want to look at people who have developed antibodies to the virus," he said.

"We were able to use this test and collect samples in the quickest way we could get."

The CAS said the ministry collected blood from transfusion centres.

"This is what was used for the representation," he said.

Kemri Nairobi Programme director Edwine   Baraza, who spoke at the briefing, said that the findings are in the preliminary stage.

"Blood donors are not a representative of the whole population and we are yet to analyse this figures. The antibodies test tells us that this person was exposed to the virus," he said.

According to the Kemri report, about 2.6 million Kenyans already have the coronavirus.

Scientists came to the conclusion after testing donated blood for antibodies.

Antibodies are proteins made by the body to attack foreign substances such as viruses and bacteria.

Their presence in blood indicates the individual has ever been infected — even if that person never showed symptoms.

The prevalence of antibodies to the virus ranged from 1.1 per cent in blood donated in Uasin Gishu county to 12.4 per cent in Nairobi.

The researchers from the Kenya Medical Research Institute - Wellcome Trust tested blood donated across the country between April 30 and June 16.

"Antibody testing suggests many more Kenyans have already been exposed to Covid-19 than have been identified by surveillance activities," Kemri says in a policy brief, released early this week.