• The interview was carried out through telephone. 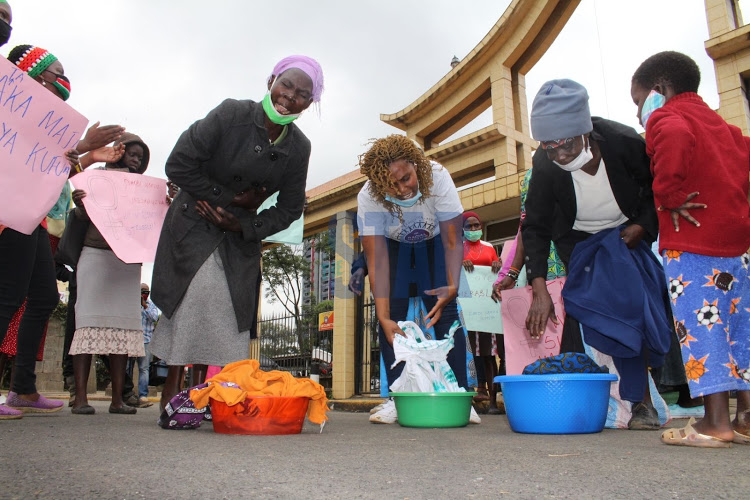 Activists and women working in the informal sector drawn from slum areas who wash clothes for a living protest in Nairobi CBD on June 15, 2020.
Image: FILE

The majority of Nairobi residents have seen a reduction in earnings since the beginning of coronavirus pandemic, a poll has shown.

The poll by TIFA released on Tuesday indicated that 69 per cent of the respondents had reduced earnings.

This was followed by 43 per cent who said they had complete loss of income due to job losses.

Twenty-two per cent said they had increased hunger, 13 per cent reduction in real income due to cost of living increase, 10 percent restriction of movement from residence.

The number who reported reduced earnings(69) due to Covid-19 reported a decrease in their expenditure on food and drinks than any other type of purchases or payments.

According to the report, a majority of Nairobians have become unemployed with most of those now jobless having become so since Covid-19’s arrival.

In the poll, 54 per cent of the respondents are unemployed with only 47 per cent being employed.

Out of the 47 per cent of the employed category, 24 per cent are self employed and are still able to do some work despite the pandemic.

Seventeen per cent are working part-time whether employed or doing their own daily work when available. Six per cent are employed full-time.

The report notes that there are moderate but significant disparities in employment status by gender.

Thirty-two per cent of men who were employed have lost their jobs since the arrival of Covid-19. This was followed by women at 29 per cent.

Some 18 per cent of women were self employed but now without work. This was followed by men at 12 percent.

Another 26 per cent of women and 22 per cent of men are self employed and still doing some work despite the virus.

Twenty percent men and 13 per cent of women are working part-time whether employed or doing own daily work when available.

Only about one-fifth (19%) of all respondents who had been working earned more than Sh 20,000 per month before the restrictions to counter the virus.

In the Sh5,000 to Sh10,000 category, the report noted that 26 per cent of the population are slotted her. Out of this number, 34 percent are females while 18 percent are males.

Twelve percent of the population is in the Sh1,000 and Sh5000 category. Out of this percentage, 20 percent are females and 6 percent males.

The data was collected on 2 to 15 June, 2020 in Nairobi's Huruma, Kibera, Mathare, Korogocho, Mukuru kwa Njenga and Kawangware

A total of 579 respondents were interviewed with a margin of error of +/- 4.1% for the total sample.

The interview was carried out through telephone.