Mombasa has an infection rate of 107.9 per cent followed by Nairobi with 55.2 per cent.

• Though Nairobi and Mombasa are both ranked under the high burden counties, Mombasa has a higher risk of transmission compared to Nairobi.

• The whole country has an average infection rate of 10.4 per cent. 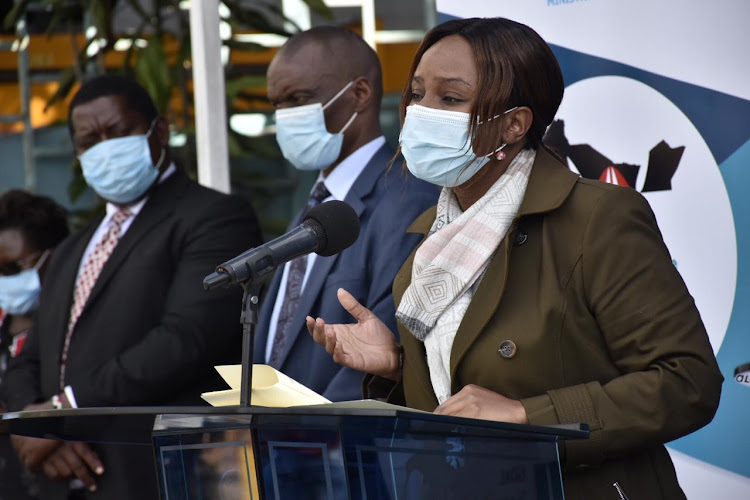 Health CAS Mercy Mwangangi speaks to the press during the daily briefing on the coronavirus pandemic on June 24, 2020.
Image: MERCY MUMO

Residents of Mombasa county are at a higher risk of contracting Covid-19 than those in Nairobi.

Health CAS Dr Mercy Mwangangi on Wednesday said though Nairobi and Mombasa are both ranked under the high burden counties, Mombasa has a higher risk of transmission compared to Nairobi.

Busia and Kajiado counties which have had many cases of cross-border truck drivers have 361 and 179 cases respectively.

According to Mwangangi, despite Mombasa having the second highest number of cases, it has a high infection rate of 107.9 per cent followed by Nairobi with 55.2 per cent per 100,000 population.

The whole country has an average infection rate of 10.4 percent.

“From these statistics and projections, it is becoming less tenable to isolate all confirmed Covid-19 patients in hospital-based treatment facilities,” Mwangangi said.

The CAS said Kenya is the only country in the region currently implementing home-based protocols as one of the case management strategies to combat the virus.

She said the protocols developed in line with the WHO guidelines were arrived at following extensive consultations with an intention of relieving pressure on health systems.

“This is in consideration that 78 per cent of the infected persons are asymptomatic or have mild symptoms which can be managed at home,” she said.

She said the guidelines were adopted taking into consideration of local socio-economic situation.

Mwangangi reiterated that the current positive cases being reported across the country are as a result of community transmission.

So far 40 out of the 47 counties have reported virus cases an equivalent of 85 percent of the counties.

She said eligible patients for the home-based care will be subjected to an assessment by health officers and must test positive of the virus but asymptomatic.

“Such patients should not have any other underlying conditions. They will only be discharged at least 14 days from the date of their first test, a period during which they should not display symptoms,” she said.

So far Kenya has reported 5,206 cases after 254 more people tested positive of the virus.

The total number of tests conducted now stands at 151,396.

“All the positive cases are Kenyans, with 186 males and 68 females with the youngest being four years and the oldest 92 years,” Mwangangi said.

Some 1,823 patients have been discharged while 130 others unfortunately succumbed.