"My brother you are a great leader. when history is written you will have a chapter."

• Ruto said Duale rendered his services as the Majority Leader in the National Assembly with passion and in style.

• After his removal, the Garissa Township MP said he was glad that from 2013-2020 he was able to process the agenda of the Majority Party effectively. 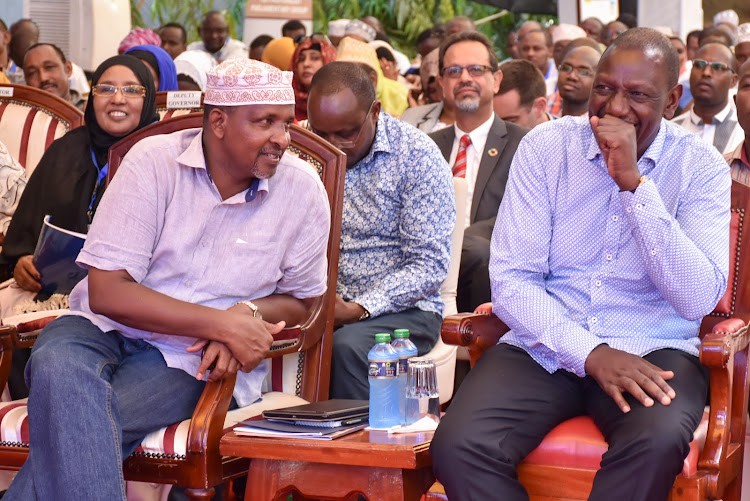 Ruto said Duale discharged his service and responsibility to the Jubilee Party in style during his tenure.

"My brother Aden Duale, you are a great leader. For the last 8 years, you discharged your responsibilities as our party's 1st majority leader with style, precision, passion and loyalty," Ruto said.

He added that "My friend when parliamentary history is written you will have a chapter. Mbele iko sawa na Mungu."

This comes hours after Duale was removed from his powerful position in Parliament during the Jubilee PG meeting held on Monday at the KICC.

After his removal, the Garissa Township MP said he was glad that from 2013-2020 he was able to process the agenda of the Majority Party effectively.

I came, I saw and I conquered, Duale pens emotional send-off letter

In particular, Duale said he oversaw the passage of over 200 Bills and 500 Motions to mention but a few.

"I came, I saw and I conquered. Today marks the end of my seven years of service to the great people of Kenya as the Leader of Majority of the National Assembly. I was the first occupant of the seat under article 108 of the constitution," Duale said.

The vocal MP said he was thankful to Uhuru who is the party leader for having given him the opportunity to serve the great people of Kenya.

"I equally thank the Deputy President, the entire Jubilee members of Parliament and my family for their support during this period," he said.

"But like I have said before, public positions are not to be personalized. When you are given a position you do your best and when the time comes for you to leave, you leave with a smile."

Duale had survived the first threat during the Jubilee PG meeting held at State House on June 2, 2020.

Duale is known to be a close ally to Deputy President William Ruto and had never appeared in any Building Bridges Initiative rally in the country.

At one point, Duale said he would only attend BBI rallies if both the President and his deputy would attend.

Kimunya bounces back in style after yet another presidential nod

He resigned as Finance Minister in 2008 after he was linked to the Grand Regency scandal.
News
2 years ago

MP said his predecessor Duale had rendered dedicated service for 8 years in that role.
News
2 years ago

In the new changes, Kanini Kega replaced Ichungwa as chair of Budget Committee.
News
2 years ago
Post a comment
WATCH: The latest videos from the Star
by KEVIN CHERUIYOT Online Journalist
News
22 June 2020 - 17:04
Read The E-Paper