Kimunya bounces back in style after yet another presidential nod

Kimunya was also Minister of Finance from 2006 to July 2008 when he resigned due to the Grand Regency Hotel scandal.

• The transfer of 25 acres to Midlands is said to have happened on June 30, 2005, when the Kipipiri MP was the minister for Lands. 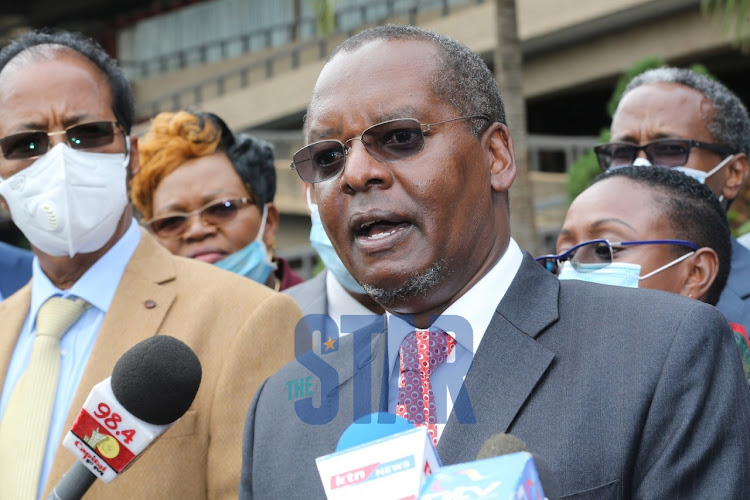 This was after a Jubilee Party's Parliamentary Group meeting chaired by President Uhuru Kenyatta at the KICC.

Kimunya, 58, is not a newbie as he has served in other senior capacities in government.

He is currently a Member of Parliament for Kipipiri constituency.

The National Assembly appointment is the latest chapter in Kimunya's experienced career in public service.

Kimunya was in 2002 appointed Minister of Lands and Settlement by former President Mwai Kibaki after he won the Kipipiri seat on a Narc ticket.

Kimunya and three other officials were in 2014 charged with allocating public land to Midlands Limited, a company associated with the legislator.

The transfer of 25 acres to Midlands is said to have happened on June 30, 2005, when the Kipipiri MP was the Lands Minister. 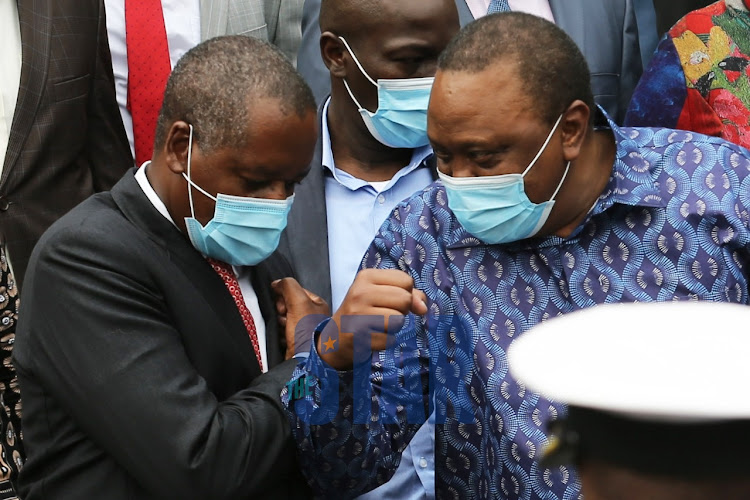 Kipipiri MP Amos Kimunya with President Uhuru Kenyatta after he was appointed National Assembly Majority Leader of in a Parliamentary Group meeting at KICC in Nairobi on Monday, June 22, 2020.
Image: FREDRICK OMONDI

The three were accused of abuse of office, failure to disclose private interest and fraudulent disposal of public property.

Kimunya was later appointed Minister of Finance from 2006 to July 2008 before he resigned due to the Grand Regency Hotel scandal.

It was alleged that the hotel was sold for far less than its actual value when it was purchased by a Libyan company.

His resignation came as a surprise to many as only a few days before, he had vowed to fight any attempt to force his resignation, going so far as to announce "I would rather die than resign!"

In his defence, Kimunya asserted that he had a clean record of fighting corruption.

He was again reappointed to the cabinet by Kibaki as Minister of Trade on January 23, 2009.

On Monday, he was once again thrust into a senior role through the Majority Leader post by President Uhuru Kenyatta who has made it clear he will only work with those who will help him fulfill his legacy.

Kimunya while speaking at the KICC after he was handed over the National Assembly Majority leadership position, said it was a humbling situation that the role had been handed to him.

Two weeks ago, Kimunya had been named as the Coalition Secretary a role that has now been handed over to Eldas MP Adan Keynan.

"This is a humbling situation for me. It shows the confidence the party leadership has on me. I will do my best to serve not only the party but the country at large," Kimunya said.

"I know what it means to be in that position, he has done really well and provided good leadership, he is still a big asset to us and the country."

Kimunya holds a Bachelor of Commerce (Accounting) from the University of Nairobi.

Kimunya also previously served as the Chairperson of ICPAK which is the national body of Certified Public Accountants.

MP said his predecessor Duale had rendered dedicated service for 8 years in that role.
News
1 year ago

THE Director of Public Prosecution Keriako Tobiko has ordered the prosecution of former Cabinet minister Amos Kimunya over alleged abuse of office ...
News
7 years ago

THE hearing of a case in which former Cabinet minister Amos Kimunya and three others are charged with abuse of office by fraudulent disposal of Sh60 ...
News
6 years ago
by SHARON MAOMBO
News
22 June 2020 - 15:51