Kenya has five of the seven species of sea turtles, each faced with threats. 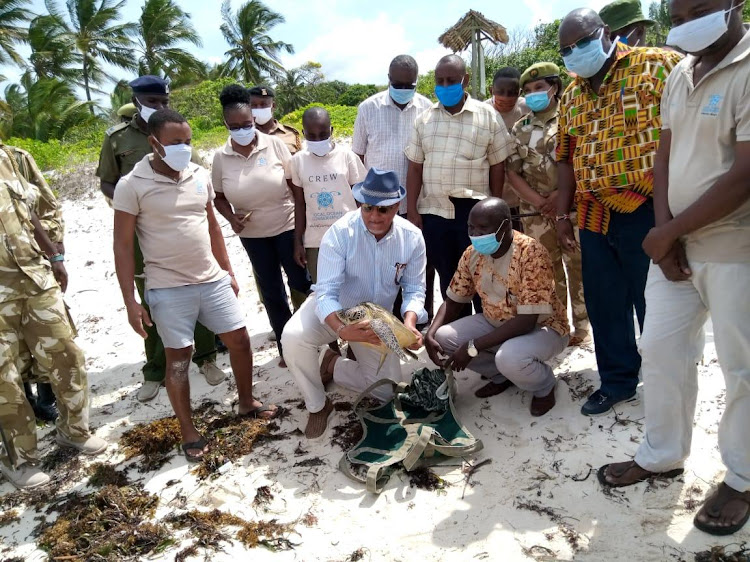 Kenya on Tuesday joined the rest of the World in marking the World Sea Turtle Day even as the reptiles face more threats.

Balala was accompanied by Wildlife PS Prof Fred Segor and other Ministry officials.

All the seven species of the sea turtles are listed under Appendix I of the Convention on International Trade in Endangered Species of Wild Fauna and Flora (CITES).

Species listed under Appendix I are faced with extinction and commercial trade in wild specimens of these species is illegal.

The International Union for Conservation of Nature (IUCN) Red List of Threatened Species lists the green turtles as ‘endangered’, the hawksbill and the leatherback turtles as ‘critically endangered’, and the olive ridley and the loggerhead turtles as ‘vulnerable’.

The CS said loggerhead’s biggest threat is from fishing while hawksbills' is the turtle shell trade.

Olive ridley’s biggest threats are consumption of their eggs, getting caught in fishing gear and unsustainable coastal development,” Balala said.

Kenya has a history of consuming marine turtle meat and eggs.

With the decline of marine turtle populations, this activity has been made illegal. Nonetheless, in some areas it is still deeply ingrained within local culture.

In addition, the coastal communities of Kenya are often very poor and have to be opportunistic in order to feed their families.

This puts marine turtles in the area at high risk of poaching.

Segor called for the incorporation of technology in marine conservation for effective planning, implementation and monitoring.