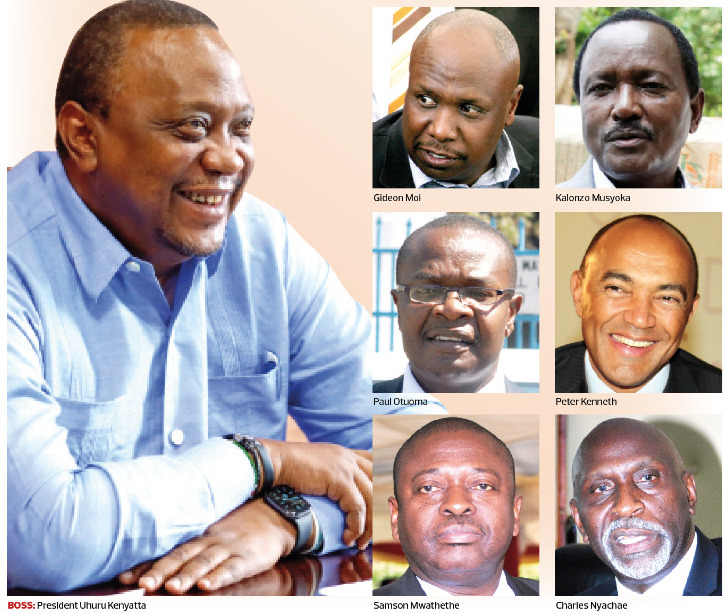 Nine prominent politicians are among those tipped for possible appointment to the Cabinet as President Uhuru Kenyatta plans a major shake-up in government.

The changes, the Star has established, will see almost half of the current Cabinet secretaries sacked. Most chief administrative and principal secretaries could also lose their jobs in the grand house cleaning.

After overhauling the parliamentary leadership, the President is said to be shifting his focus to the Cabinet and is reportedly keen on tapping the most experienced hands to drive his legacy agenda.

According to a highly placed source aware of the looming Cabinet reshuffle, the President could announce the changes any time from now.

In the expected changes, Kenya National African Union Party chairman Gideon Moi could be appointed to the Cabinet, a move that will cause a by-election in Baringo county which he represents in the Senate.

The move is part of an elaborate plan to elevate the scion of former President Daniel Moi with an office with a national profile that could be critical in his presidential ambitions.

Gideon has hinted that he will be seeking to succeed Uhuru in 2022.

Kalonzo is proposed to take over the Ministry of Foreign Affairs, with Rutto landing the Agriculture docket while Gideon will oversee the lucrative Energy portfolio.

There are reports that Uhuru may hive off the immigration and registration of persons department from the Interior and Coordination of National Government ministry and name Mwathethe as the new docket's boss.

Sources say Kalonzo and Rutto have already accepted the offers while the Kanu chairman was still undecided “as the move has political implications on his 2022 presidential prospects.”

However, it's said there have been concerns as to who will then become Kanu party leader as the Constitution does not allow a CS to engage in politics.

Some Kanu leaders are instead pushing for businessman and former national chairman of the Kenya National Chamber of Commerce and Industry Kiprono Kittony to be appointed instead of Moi.

“It is now not about who is joining the Cabinet and who is not. It is now about when the President will unveil the names,” said a source aware of the closely guarded secrets.

Unlike in 2013 where Uhuru picked mostly technocrats, it is now understood that the President has opted for a politicians-dominated Cabinet.

The new CSs are expected to help the President "explain to Kenyans the projects government is implementing as Uhuru firms up his legacy".

The impending changes have already triggered panic in the Cabinet amidst reports that key allies of Deputy President William Ruto and those nursing 2022 political ambitions will be dropped.

Otuoma was in December 2018 appointed to chair the Privatisation Commission while Kabando was appointed last year as the chairman of the Board of Local Authorities Provident Fund.

The Nyachae family that played a key role in the re-election of Uhuru in Gusii region is fronting Charles.

If appointed, Charles who served as the chairman of the defunct Constitutional Implementation Commission will have to resign as a judge.

However, it is understood that negotiations are still ongoing on who between Peter Kenneth and Jamleck Kamau will be given the position considering that both come from Murang’a county.

Both Kanu, Chama Cha Mashinani and Wiper parties have all agreed to work with President Kenyatta.

When contacted for a comment on Monday, Kanu secretary general Nick Salat did not deny or confirm if Kanu was set to be a major beneficiary of the looming changes.

Salat told the Star that his party “had capable men and women ready to help the President in serving Kenyans”.

“Appointment of people to Cabinet is the prerogative of the President. It is just a matter of time before we see such changes. If our members are picked, we are not going to shy away. Where the President deems fit for us to serve, we will. We are equally capable,” Salat said on the phone.

Jamleck who was once the Nairobi Metropolitan Minister told the Star, “let’s wait and see”.

“It is upon the President to appoint a team of people he thinks will help him. He is the one who decides who fits to be where and which position but for now, I am not aware if I am in the list but let us wait,” he said.

However, two weeks ago, during an interview with Emoo FM, Rutto said his party has agreed to support the government’s development agenda, contribute to the resuscitation of the economy post-coronavirus pandemic and the passage of bills and motions in Parliament and county assemblies.

“The talks are between CCM and Jubilee and they are on how to keep Kenya peaceful, how to address the economy after Covid-19, schools are closed and moving forward for the next two years. We never discussed on who to vote for or not to vote for in 2022,” he said.

Uhuru moved Rachel Omamo from the Defence docket to Foreign Affairs while Sicily Kariuki who was then serving as the CS for Health was moved to the Water.

Kariuki took over from Simon Chelugui who was moved to the Labour ministry.

Peter Munya moved from Trade and Industrialisation to Agriculture while Monica Juma swapped places with Omamo.

Ukur Yatani was confirmed as the substantive National Treasury Cabinet Secretary. He had been the acting CS after Rotich was charged in July last year.

Mutahi Kagwe and Betty Maina were brought on board as Health and Industrialisation cabinet secretaries respectively.

Post a comment
WATCH: The latest videos from the Star
by GIDEON KETER Political Reporter
News
16 June 2020 - 06:18
Read The E-Paper