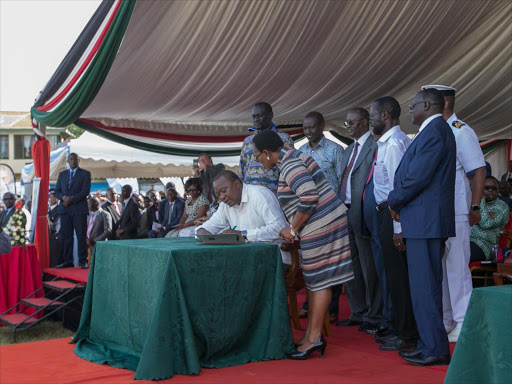 President Uhuru Kenyatta signs the Universal Health Coverage charter during the launch of the UHC pilot programme at Mamboleo Showground, Kisumu, on December 13, 2018.

The national roll-out of the Universal Health Coverage is on course, despite the devastation caused by Covid-19.

"The government continues to prioritise healthcare by scaling up universal health coverage to all the counties," Yatani said.

The four were selected as they represent unique characteristics: Isiolo is a frontier county with mainly nomadic and semi-nomadic population; Kisumu has a high burden of infectious diseases; Machakos is weighed down by road accidents, and Nyeri has a high prevalence of non-communicable diseases.

Some of the challenges encountered included under-funding and shortage of personnel against a huge number of patients due to the availability of free services.

On Thursday, Yatani said he has generally increased allocation to health.

The managed equipment services received Sh6.2 billion. The money will pay suppliers who provide on-the-job user training and maintenance of the equipment.

MES programme covers 98 health facilities across the country, which have received equipment for radiology, ICU, and renal care.

Yatani said he has also allocated Sh5.3 billion to transform the health care systems for UHC, Sh4.1 billion to cater for free maternity health care and Sh1.8 billion to provide medical cover for the elderly and severely disabled.

Health services were also included in the eight-point Economic Stimulus Programme to revive the economy.

Treasury allocated Sh56.6 billion for this programme, which supports a range of economic activities including local manufacturing.

Sh1.2 billion was proposed for the recruitment of an additional 5,000 healthcare workers for one year.

"This will enhance our Covid-19 response capabilities and strengthen implementation of the universal health coverage programme," Yatani said.

He allocated an additional Sh500 million to supply 20,000 locally made beds and bedding to public hospitals, and Sh25 million to establish 50 walk-through sanitiser at border points and hospitals across the country.