Osotsi says he doesn’t need a coup to take over the party as he still is the custodian of crucial documents.

• A planned coup in ANC, allegedly sponsored by Raila Odinga’s ODM party to remove  Mudavadi and hand the party to a friendly team, has been mentioned. 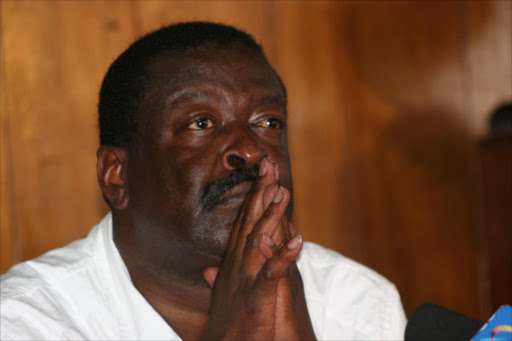 ANC leader Musalia Mudavadi’s grip on the party faces headwinds as his five-year term comes to an end next week.

The ANC constitution gives party official a five-year term after which the seats become vacant and grassroots elections are conducted.

Mudavadi took over in June 2015 and by next week he shall have served one full term.

A planned coup in ANC, allegedly sponsored by Raila Odinga’s ODM party to remove  Mudavadi and hand the party to a friendly team, has been alleged.

He asked Mudavadi to respect the party’s constitution and organise an election by Monday when his term expires.

Osotsi said that being amongst the founder members of ANC, he doesn’t need a coup to make changes in the leadership of the party.

"I do not need a plan to take over the party because I am the founder and I have all the documents," Osotsi said.

"The best thing is to prepare an election timetable within the party's constitution."

Osotsi urged Registrar of Political Parties Ann Nderitu to deregister the party if no election is conducted by next week.

But ANC secretary general Barack Muluka told the Star that Raila is using the nominated senator to wreck the party in a scheme to cut them down to size.

“We know that he (Osotsi) is operating under instructions from Raila and ODM as was revealed by Savula who was also with them and who changed midstream, it is part of external interference in the affairs of the party,” he said.

Muluka also clarified that the party’s NEC met virtually two weeks ago and resolved to seek an extension from Nderitu.

“On the issue of elapsing of terms of the current offices that is something the party has already dealt with. We are waiting for him (Osotsi) to do whatever he said he wants to do. Those are kicks of a dying horse,” Muluka said.

He said that the terms will end next month and not next week as claimed by Osotsi.

ANC deputy party leader Ayub Savula sparked a debate of imminent coup after claiming that he was approached by ODM to topple Mudavadi in exchange for their support in the 2022 Kakamega gubernatorial race.

But according to Osotsi, there is an ongoing plan to have Mudavadi work with Deputy President William Ruto and the proponents of the scheme are using the coup narrative to gain sympathy.

“They have made up their minds to join Ruto and want to get excuses. If you want to join Ruto – and we know you are headed there – please go without dragging other people,” the nominated lawmaker said.

ODM also distanced itself from the claims by ANC boss Mudavadi and his deputy Savula dismissing their remarks as imagination.

“Savula is not even on our radar as one of the possible successors of Governor Oparanya and any claims otherwise are but figments of his imagination,” ODM secretary general Edwin Sifuna said.

Sifuna described Mudavadi as a person more likely to hurt his political ambition without the help of detractors.

“Musalia Mudavadi is a one gear lorry hurtling down a hill unaided, on a long-term self-destruct mode that has never needed the assistance of Raila to crush into oblivion,” he said.

“Our party is a large institution currently trying to help deal with the national issues and we take great exception to be dragged to the level of the village parties.”